Which Jobs Spawn the Heaviest Drinking?

I ran across this interesting article on which industries spawn the most drinkers.  I was a bit surprised by some, and not at all by others.  Take a look at it and see what you think. 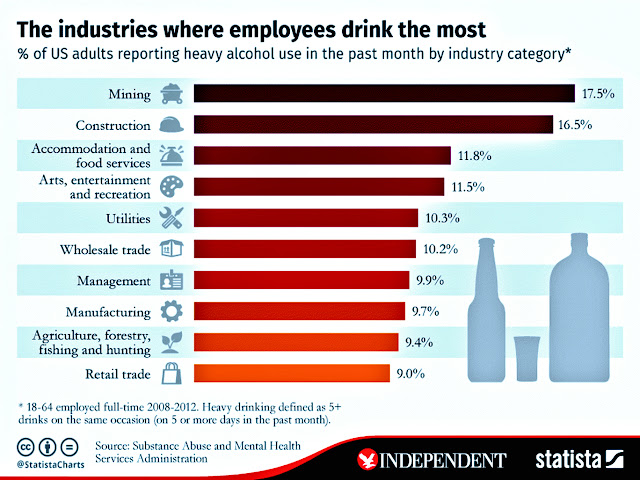 The US' alcohol consumption was also shown to have increased between 2006 and 2010 despite the economic recession.   Many people turn to a pint on a Friday to mark the end of the working week.
But heavy drinking, in which five or more drinks are consumed in one sitting, appears to be more of a problem in some lines of work than others.   According to government data studied by Statista, the above graphic shows the ten top industries in the US where workers say they drink heavily each month.

Miners and builders report drinking the most, with 17.5 per cent of adults in the mining industry saying they drank heavily in the last month, and the construction industry not far behind on 16.5 per cent.  Niall McCarthy, a data journalist at Statista, found working down a mine shaft led more people to find a way to unwind at the end of the day. "Due to its dark, tough and dangerous nature, mining has been named as the industry with the hardest drinkers in the United States," said Mr McCarthy.

Hospitality and food services came in third at 11.8 per cent, whilst manufacturing, agriculture and the retail trade came in eighth, ninth and tenth with more modest amounts of alcohol consumed.  Heavy drinking, or binge drinking, is defined in the study as five or more drinks on the same occasion, on five or more days in the past month.

The data comes as a study this month by the Centers for Disease Control and Prevention (CDC) showed that binge drinking in the US has increased between 2006 and 2010, with a great cost to the economy.

Posted by Bahama Bob's Rumstyles at 6:54 AM No comments: