Puerto Ricans have long been known for their love of rum, and particularly their love of Don Q.   More than two-thirds of the island’s population drinks this particular rum, which is distilled, manufactured, and distributed world-wide from Destilería Serrallés headquarters in Ponce, Puerto Rico.   Not only known for quality products, in the last decade the Serrallés family has made strides in implementing sustainable technology and reducing their foot print on the environment.  This issue has been reverberating throughout the spirit-making industry.
Many of these green initiatives came directly from Roberto Serrallés, a sixth-generation distiller who left Puerto Rico to become a teacher, but wound up back at his family’s distillery.   “I wanted to teach; that was my calling in life,” says Roberto Serrallés, “I knew I wanted to teach at the university level, which requires a PhD, and that’s part of why I ended up in Environmental Sciences. As I was writing my dissertation, I got a call from Felix Juan Serrallés, Jr., my father and company president and CEO.  He said he needed help with the distillery’s wastewater system, so, I was initially hired on as a contractor and worked on this wastewater treatment system for years that we now have up and running.”
Rum, and spirit-making in general, produces a lot of wastewater. “When you distill rum, wastewater ends up being five times the volume of the spirit produced”.   “We want to take that wastewater and reuse it, turn it into some form of energy, Serralles explains.   I see this as an extension of the process of rum-making, which begins with molasses, a byproduct of sugar making.” 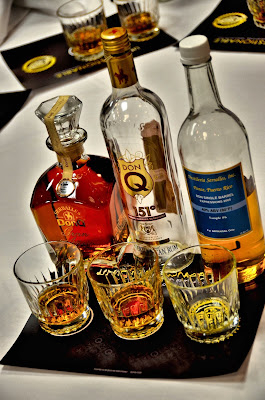 The Serrallés family began as sugarcane farmers, and rum-making naturally evolved as a way to utilize the leftover molasses.   “We took a waste stream and turned it into something value added,” says Serrallés. Eliminating wastewater runoff into nearby waterways also aligned with a perspective on environmental stewardship that Roberto learned during his PhD studies.  “Some of my guiding principles come from the field of industrial ecology, specifically Marian Chertow, who teaches at Yale. Part of her work looks at the lack of waste in naturally occurring systems and suggests we should mimic that in industry.”  “There is no waste in nature, and that is an ideal system. So, how do we find a use for all our outputs?”  This mission has led to significant changes at Destilería Serrallés over the last decade. Serrallés focused his work on the system the distillery uses for wastewater treatment, which several other distillers now emulate.  It captures carbon dioxide released during the fermentation process and distributes it to local soda producers, reducing greenhouse gas emissions.
Wastewater from the distillation process has a myriad of uses, finding its way into compost, biofuel, and irrigation water. Don Q has also has completely eliminated wastewater discharge into nearby oceans.  “They came to us and wanted to establish a partnership and we were thrilled.    We monitor the water in Puerto Rico, and we also do work protecting coral reefs, which are very sensitive to changes in water temperature and nitrification.  These potential impacts from wastewater discharge at nearby distilleries. Keeping wastewater out of the ocean keeps helps keep reef systems healthy.  In the future, Serrallés hopes to continue developing sustainable technologies for Destilería Serrallés, and encouraging the implementation of those methods industrywide. “Sustainability is not a destination,” he says. “It’s a commitment to a continual process. We are trying, and it’s about trying to be better every day.”


This is a great conceptual project, especially when you consider that rum came about as a means of disposing of the waste molasses from the sugar making industry.
Posted by Bahama Bob's Rumstyles at 5:56 AM 2 comments: