Woodies on the Santa Cruz Wharf 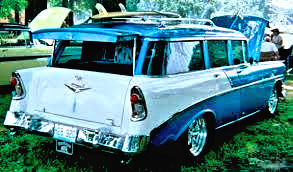 As a younger boy growing up in the San Francisco Bay area, I spent a lot of time at Santa Cruz
surfing and just plain partying on and around the beach at Santa Cruz.  In the era that surrounded 1962 through 1966, most of us were driving station wagons with a surfboard of two sticking out of the back window.  I was lucky enough to have had a 1956 Chevrolet station wagon that belonged to the parents, but did the job very well to haul the surfboards and a few friends over the mountain to the beach at Santa Cruz.  Many of my friends had woodies, the coolest of the surfer vehicles, but the Chevy wagon was plenty cool enough to get us there and back.

This past weekend, the annual gathering of the National Woody Club happened at the Santa Cruz Wharf.  A gathering of some 185 classic woodies all parked for display on the wharf.  This is always a very great show, this year was no exception.  Check out the Video below.

See the Drone Video of the woodies and the Beach at Santa Cruz.   https://youtu.be/W92349BGH7c 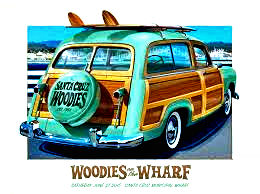 Santa Cruz residents took a trip back in time on Saturday at the 14th annual "Woodies on the Wharf," organized by the Santa Cruz Woodies.   More than 185 Woodies dating as far back as 1923 were on public display on the Santa Cruz wharf.
Many of the woodies  were sporting license plates with monikers like "LIL WODY," "WDY4DAD" AND "51 WUDDY."    There were some  185 vehicles on display proving that  Woodies are still very popular even some 50 years after their initial surfer popularity.   Woodies of almost every age, color, size and make lined the pier as attendees meandered and observed. 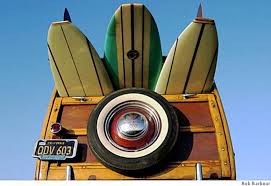 "Every year there's a lot of unique cars here," said Bob Barbour, one of the club's founding members and a Woody owner.    Barbour said that although the turnout of woodies was not disappointing, it was slightly lower than years past due to the weak economy and poor gas prices. Usually there are more than 200 Woodies in the show.   "This is almost exactly what we guessed it would be," he said.   About 75 to 80 percent of the Woodies were returning participants from years past, according to Santa Cruz Woodies President Ken Francis. 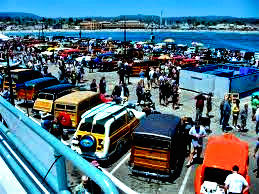 Read more at http://www.scsextra.com/story.php?sid=77791
I'm glad to see the revival of such cool vehicles where they were seen in great numbers in the days of the Beach Boys and Surfin' USA.   Hope to see this event continue for many more years.  ;o)