Koloa Rum and the Kilohana Plantation on Kauai, Hawaii

The Koloa Rum Company is nestled on the tiny island of Kauai in the Hawaii.    Rum is deeply seated in the history of Kauai, Captain James Cook and his crews of the H.M.S. Resolution and the H.M.S. Discovery were believed to have brought rum to the island when they first made landfall in 1778.     The Koloa Plantation and Mill established in 1835, first harvested sugar cane in 1837 and they produced  some two tons of raw sugar the first year.     Like in many other sugar producing regions the rum production quickly followed the sugar production in order to get rid of the waste from the sugar production.     These days the island's "tall cane" still is in production in the rich volcanic soil and fed by the water from Mount Wai'ale'ale.    This area is said to be the wettest spot on the earth and the pure mountain water nurtures this very sugar rich cane to maturity. 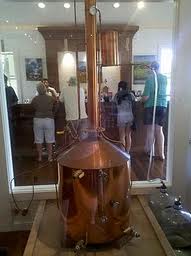 Koloa Rum Company was established on the grounds of the Kukui Brands facilities in 2008.   This is still the primary location for the bottling and distillation of the rums.    Koloa Rum Company is the first and only legal distillery on the island.      The rums are twice distilled in a 1210 gallon Liberty Coppersmiths still that was built in 1947 and refitted for use by the Koloa Rum Company.    The Koloa Rums are made from locally grown sugar cane and produced as a single batch premium rum.    The first barrels of rum were bottled in September of 2009 to coincide with the opening of the Tasting Room at the Kilohana Plantation.    The combination of the finest sugar cane and the pure water that is naturally filtered by the volcanic strata and stored naturally in the aquifers, makes this a very special and flavorful rum. 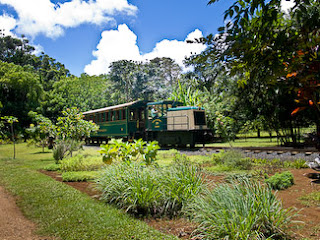 The tasting room is is the Kilohana Plantation, a full operational plantation in Kauai that offers a wide variety of experiences for it's visitors.    The narrow gauge railroad offers a chance to view the plantation.     Ike, the1939Whitcomb Diesel locomotive pulls the mahogany coaches modeled after the personal car of King Kamehameha as it winds through the plantation with the whistle blowing and the steel wheels chattering.

The Koloa Tasting Room is a must visit at the plantation, where you will be able to sample the award winning Koloa Rums.    This is a highlight of the tour and you won't soon forget the fine rums or the entire Kauai experience.     ;o)

Posted by Bahama Bob's Rumstyles at 11:10 AM No comments: