Where did the Mojito Come From?

One of the most popular cocktails for today's rum drinkers is the Mojito.  It is a light and refreshing combination of rum, mint, sweetener and lime.

The origin of this wonderful cocktail is very sketchy, but it does relate to the natives of Cuba and Sir Francis Drake.   It was known that the local South American Indians had remedies for various tropical illnesses; so a small boarding party from pirate Sir Richard Drake's ship went ashore on Cuba and came back with ingredients for a medicine which was effective for curing dysentery and scurvy. The ingredients were aguardiente de caña (a crude form of rum, translates as fire water from sugar cane) added with local tropical ingredients; lime, sugarcane juice and mint.  Drinking lime juice in itself would have been a great help in staving off scurvy and dysentery.
Some historians contend that African slaves who worked in the Cuban sugar cane fields during the 19th century were instrumental in the cocktail's origin.  Guarapo, the sugar cane juice often used in Mojitos, was a popular drink amongst the slaves who helped coin the name of the sweet nectar.

One of the first written records of the recipe was found in a Sloppy Joe's of Havana recipe book from the 1930's   The advent of Prohibition in the United States spurred its original owner, Jose Garcia Abeal, to change the emphasis from food service to liquor service when American tourists would visit Havana for the nightlife, the gambling and the alcohol they could not obtain back home. 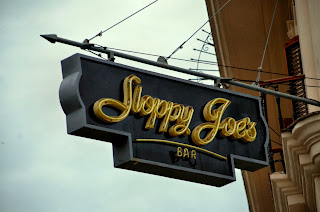 
§  Serve in a High Ball glass, with cracked ice.
Ernest Hemingway made the mojito made at the La Bodeguita del Medio famous during his tenure in the Havana area. 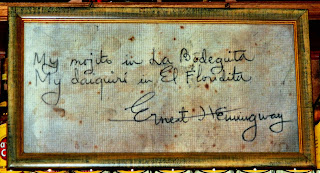 No matter how you make the Mojito, and there are many versions of this classic cocktail out there, it is a wonderful drink.   The El Floridita from a menu dated 1934 showed  offered up versions made with gin and brandy in addition to rum.  Another version known as the Old Cuban used champagne instead of soda water.   I have my own version as well, but I can save this for another blog.   Basically this is the history of the magnificent cocktail as far as I have been able to chase it down.   There are as many stories as there are people who make them, so the blurr is pretty normal for a fine cocktail like this one.   ;o)

Posted by Bahama Bob's Rumstyles at 8:53 AM No comments: