The St. Nicolas Abbey Distillery in Barbados offers unique rums to its guests that visit the Abbey each year.    There will soon be a new unaged white rum being added to the inventory.

The new white rum made its debut with a big bang at the UK Rumfest in London.   St Nicolas Abbey's new unaged white rum won the Boutique Rumfest Award of Best White Rum.   In addition, St. Nicolas Abbey won the Golden Rum Barrel for "Distillery of the Year" in addition.   All in all a very productive visit for the Warren Family in London. 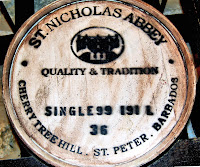 Larry Warren and his family have done an outstanding job of restoring the Abbey and over the past few years I have enjoyed visiting them and seeing the progress that they have made on the project of bringing St. Nicolas Abbey back to life and making it a great destination for visitors to Barbados.
Posted by Bahama Bob's Rumstyles at 8:45 AM No comments: