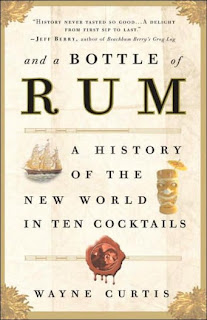 America has rum so deeply embedded it to it's history that it is not hard to understand why we are the biggest consumer of rum in the world.      We have been involved with rum for as long as we have been on this continent.     Wayne Curtis, has just published a book entitled "and a BOTTLE of RUM", that follows rum and how it has affected American History.     It is subtitled "A History of the New World in 10 Cocktails", examining the American History through the spyglass call rum.     Unraveling American History from the current rum growth of today back through the days of Don the Beachcomber and Trader Vic, Prohabition, Slave for sugar era, sugar taxes, pirate lore, and all the way back to the first settlements in America.     Even the "Boston Tea Party" was re ally about molasses rather than tea, Americans needed the molasses to make their rum in colonial New England and the taxes were really hampering the availability of this commodity.    It was said that the New England Distilleries as a part of the triangular trade between Africa, Barbados, and America were the "central bankers of the slave trade".

Curtis opens his book with the statement "Rum is the history of America in a Glass".    Rum was vital throughout the colonial days in America.     Ben Franklin had a few sayings about being drunk, like "He's been to Barbados".     Curtis als mentions bits  of how rum was part of "Paul Revere's Ride", the pre-Castro Cuba, and the "Trademark wars", all of these are about rum.     Saluting America with a toast  the glass would have to contain grog, a "rum flip", or one of the curious mixtures rum, water,molasses, and nutmeg the  pirates called "bombo".   This is a really rough, nasty cocktail in it's original recipe, but with a bit of work in the "Rum Lab", I think that this could be an interesting modern cocktail with an American History lesson included for free.

Mr. Curtis's book is available  from Amazon on line and a welcome adddition to any rum effecinado's collection.    http://www.amazon.com/Bottle-Rum-History-World-Cocktails/dp/1400051673.    ;o)
Posted by Bahama Bob's Rumstyles at 8:40 AM No comments: