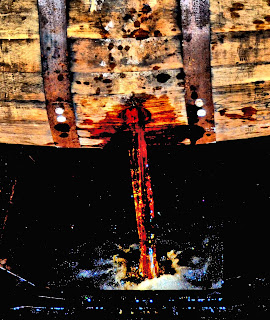 and new styles of brown liquor drinks.   Some might call it a boom. But many distillers have seen the boom-and-bust cycle of liquor popularity before and are exploring ways to hedge their bets against another bust.

"We're definitely on an upward trajectory," says Maggie Kimberl, a whiskey writer and historian. "There are a lot of people who have opinions about whether we're at the bottom of the upward trajectory, the middle, the top - but most people feel like we're somewhere in the middle."   But with booms come busts, and the bourbon industry is historically cyclical.   The first big bust was during Prohibition. "There was a city called Tyrone, Ky., which is near Wild Turkey, that was basically wiped off the map by Prohibition," Kimberl says. "It was a very small town that had two or three, maybe four bourbon distilleries in it, and when Prohibition came about, that town ceased to exist."

Then American whiskey boomed again between 1945 and about 1970.  After that, "people were starting to turn to wine, beer and clear spirits."   "Bourbon was not especially popular at that time."  Then in about 2000, bourbon distilleries started seeing renewed interest in their products. In 2016, bourbon and American whiskey sales topped $3 billion.  "But there are always people saying this can't last, it's going to end soon, the bubble's going to burst."

That's especially the case lately, as national media have started turning their focus to other spirits. For the past few years, outlets - ranging from Forbes to Liquor.com - have been predicting the "rise of rum."   Some bourbon distillers are diversifying into other spirits like rum.    "It does bear out a little bit in consumer spending, I think."   "But it's not something where somebody is going to say bourbon is out and rum is in and the bourbon bottom is going to fall out."

Big beverage conglomerates are set up to weather changes in consumer tastes. "They all own rum, or several rums, but they all own bourbon, Scotch, tequila, vodkas, all of these things," so they're not worried about the next thing. "They have the next thing."

The craft distillery business like so many other businesses, diversity is often the key to longevity.