The Wind and the Sea Gulls 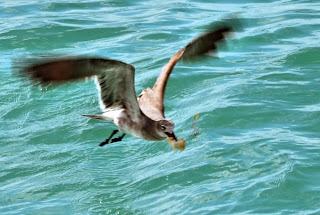 The winds have been blowing pretty steady for the past few days here in Key West.  This keeps the temperatures comfortable and the seas pretty rough.  The sea gulls on the other hand really thrive on the winds, putting on aerial shows that can't be matched by many other birds.  To watch them snatch a fish or a piece of bread out of the water in flight or even in from the air is mind boggling.     Their aerial agility and quick turning abilities will just amaze you as you sit on the dock or the bay and watch all of their antics. 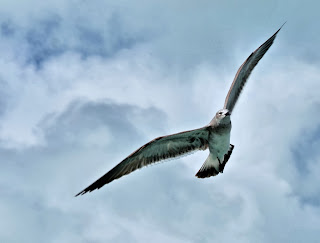 You can hear them screaming at each other making noise that sound like they are tell others that it is "MINE, MINE" as the fly close to each other.   They have the ability to catch the currents of air and just ride them up and  down Using them to attain the position and the speed they need to hunt their food.   Some times I get the feeling that they just enjoy the aerobatics for the sake of the aerobatics.   They just seem to be able to bank, spin, dive and climb at will for no apparent reason.  They seem to just take pride in the show and the thrill of the flying. 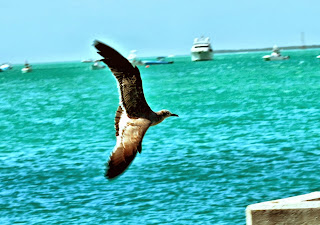 It is sort of like the story of "Jonathan Livingston Seagull" and how he learned to master the sky just for the thrill of mastering it.  They fly in numbers like WWI Sopwith Camels and Fokkers swooping around the sky passing just inches apart as the pass in the sky above the harbor.    The wing warping they have mastered gives them such absolute control as they maneuver around the skies.   Sea gulls will swirl around the skies for hours and finally approach and make a perfect touch down on land even in the highest of winds and adversity.  ;o) 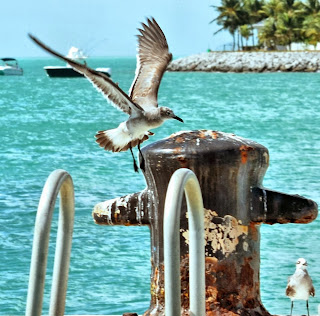 Posted by Bahama Bob's Rumstyles at 8:14 AM No comments: