The Lime Rickey Cocktail was a very popular during the early 1900's as a gin cocktail and later appeared at the soda shoppe's as a non-alcoholic beverage.   Sometimes referred to simply as a "Rickey" or "Gin Rickey," the drink was famously concocted at Shoomaker's Bar in Washington D.C., by bartender George A. Williamson back in the 1880s, purportedly in collaboration with Democratic lobbyist Colonel Joe Rickey, soon after, it became a worldwide sensation when mixed with gin.

During Prohibition, the soda shoppe Lime Rickey became very popular and remained that way until the sixty's and and seventy's.  Today is seems to be making more appearances both as an alcoholic and non-alcoholic beverage. 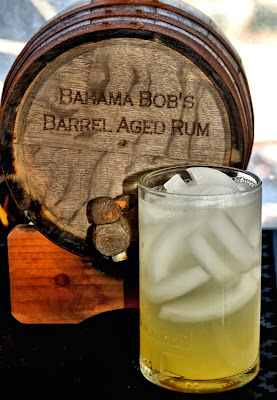 
In a shaker filled with ice, combine white rum, lime juice, and the simple syrup. Shake until chilled and add soda water and stir.   Pour into ice-filled tumbler and garnish with lime wheel.

Posted by Bahama Bob's Rumstyles at 5:53 AM No comments: