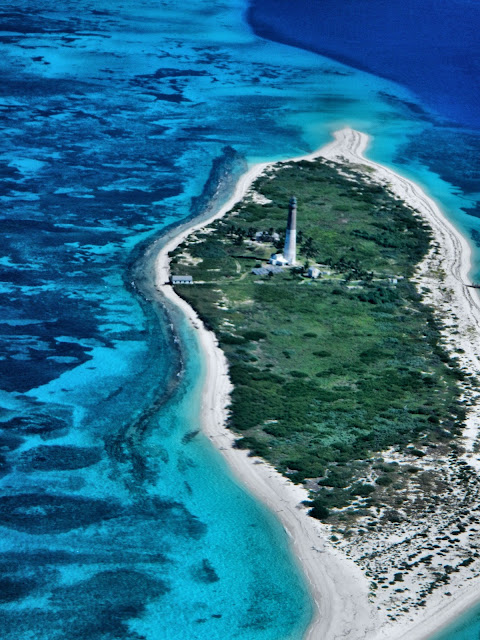 From Wikipedia, the free encyclopedia
The Dry Tortugas Light is located on Loggerhead Key, three miles west of Fort Jefferson, Florida. A lighthouse was established on Bush Key in 1825, and refitted with a new lantern in 1846. Construction on a new lighthouse on Loggerhead Key began in 1856 and was completed in 1858. The Loggerhead Key lighthouse has a stone foundation and a conical brick tower. The walls are six feet thick at the base and taper to four feet thick at the top. The tower was painted black on the upper part and white below (later unpainted on the upper part and white below). A radio room is attached to the base of the tower. The original lens was a first order Fresnel lens, which is now on display at the United States Coast Guard Aids to Navigation School in Yorktown, Virginia. The light was automated in 1988.
The Dry Tortugas lighthouse, along with the Garden Key lighthouse at Fort Jefferson, were the only lights on the Gulf coast that stayed in full operation throughout the American Civil War. The tower was damaged by a hurricane in October 1873[3] and plans were drawn up for a new tower. However, repairs to the tower were so successful that the plans for a new tower were shelved. Its appearance and striping is similar to the Hunting Island Light, though its construction is different.
Beginning with its electrification in 1931, it was the most powerful lighthouse in America, with three million candela

Posted by Bahama Bob's Rumstyles at 7:20 AM No comments: