MHOBA Rum is the original  Mpumalanga rum, proudly and entirely  hand crafted in small batches from our local Nkomazi cane sugar.  Being produced from sugar cane, MHOBA Rum is what is termed an agricultural rum from the French term "rhum agricole" as opposed to most rum which is produced in large quantities from molasses, a by-product from large scale sugar production.

MHOBA Rum is made directly from "liquid sugar" squeezed from individual sticks of Nkomazi cane sugar, grown on the farm surrounding our micro distillery on the outskirts of the small town of Malalane in the heart of the cane-growing area in the Crocodile River Valley of Mpumalanga, South Africa.   The MHOBA Rum Distillery is housed in an old farm building which has been renovated and upgraded to accommodate the rum production. 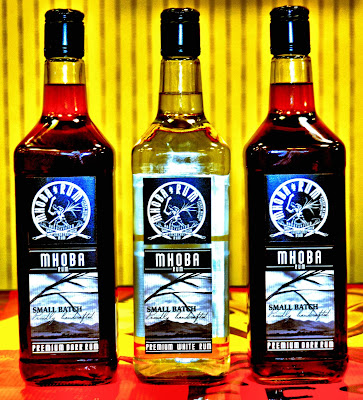 Fermentation of the Nkomazi cane sugar wash is performed using a proprietary strain of yeast at the warm ambient temperatures provided by our tropical climate.   Our custom built small batch stills produce extremely pure and concentrated cane rum batches of between 20 and 25 liters. Each batch is distilled with great care and attention to temperature which determines which fractions of the batch are collected, discarded or re-distilled with a future batch. This careful but time consuming method of distilling allows a much more refined raw rum spirit than would be possible with large scale continuous distillation processes which do not separate any of the distillation fractions. Each individual concentrated rum batch is then checked for taste and aroma before being blended with other suitable batches and local rock fissure water to achieve an ideal ageing concentration.

MHOBA Rum is then rested, mellowed and flavored using toasted virgin American white oak until the rum has acquired the optimum flavor, aroma and color from the interaction with the toasted oak. Once the rum has achieved the required flavor, color and aroma the rum is filtered from the virgin oak before being blended with other suitably aged batches and bottled at the MHOBA Rum distillery.

MHOBA Rum is a unique and wonderful experience that was a great surprise for all of the judges at the Rum Festival last month.  This tells me that the people of South Africa are well on their way to becoming well known rum makers in the near future.
Posted by Bahama Bob's Rumstyles at 5:28 AM 1 comment: