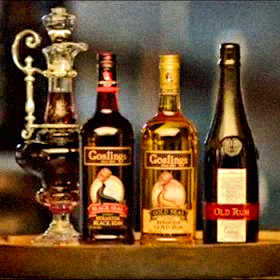 Gosling-Castle Partners have unveiled the first television advertisement for its Goslings Rum brand, in honor of the 35th America’s Cup sailing event in Bermuda.   The advertisement stars Malcolm Gosling, 7th generation president and CEO of Gosling-Castle Partners, and depicts him strolling among rows of barrels.   The Ad cuts back and forth between his quiet footsteps and the loud chaos of the America’s Cup racing action..


Malcolm Gosling said, “I said, if we’re going to do this, we’re going to do it first class”. “We put a world of care into our products; we need that to come through in the look and feel of this television commercial.”  The advertisement will be screened at the 35th America’s Cup during the races and on the NBC and NBCSN networks televised coverage of the grand event.   Two additional television commercials were shot and produced featuring Goslings Rum, the trademarked Dark ‘n Stormy Cocktail and Goslings Stormy Ginger Beer.
Posted by Bahama Bob's Rumstyles at 6:02 AM 1 comment: