Today is the final day of judging rum, two sessions that include Agricole and Cachaca.  We hae three great meetings with Mezan Rum, Doc Brown's Really Bad Rum and the evening by the pool with Plantation raps the day up. 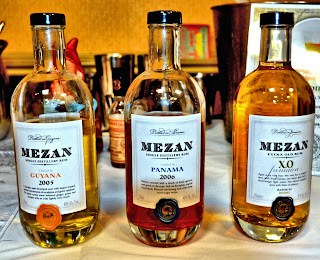 Our first meeting is breakfast with Mezan Rums - Our Niche.  Warren Bobrow, a writer, barman, and in a previous life a banker, is our spokesman for Mezan Rums.   Mezan is a collection of rums that are brought to you in their original untouched condition.  These are rums that are aged by the distillery for 8 years and then brought to England and the final aging is completed in the cool atmosphere of England.  This is a small batch product, the Guyana 2005 and the Panama 2006, there are only 3,000 bottles made and the Jaimaca XO, the only blended rum in the line.   This expression  is blended from rums ranging from 4 to 23 years old from Long Pond Estate, Worthy Park Estate, Monymusk Plantation,and Hampton Estate Distilleries in Jamaica.

These are very unique in the rum world because of the way that they are made.  There are no additives, coloring or anything else added.  The rums are dropped to their 40 % ABV and bottled.  This is what gives these rums their very natural rum flavor and the funkiness of a somewhat "raw" rum.   All of the flavors that you taste are a result of the time spent in used bourbon barrels that they are rested in before bottling. 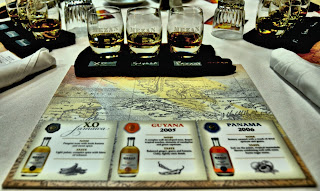 The Panama 2005 is produced in a multiple column still distillery that can not be named because of contractual agreements.  This distillery grows its own sugarcane for both its Aguardiente and rum.  They also have their own proprietary yeast that give their products their very special flavors.

Session 5 of the judging is next on the agenda, this session is dedicated exclusively to Cachaca.  Cachaca is a very unique spirit that comes only from Brazil.  It is sort of the "bourbon" of the sugarcane spirits in that it can not be called Chacaca unless it is made in Brazil.  This is a spirit that has come into the forefront as a result of the World Cup Soccer Championships that were held in Brazil a few years back.  These are very different from most of the rums that you come across elsewhere in the world, but do have some very enjoyable flavors. 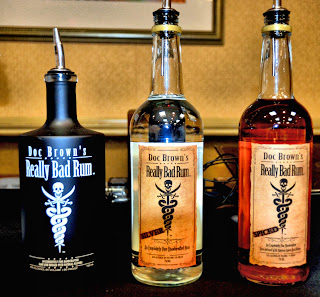 Doc Brown's Really Bad Rum is our host for the lunch meeting. This is a rum from America's traditional home of the rum business, Billerica, Massachusetts.  Doc Brown's Really Bad Rum gets its name from a 16th century sailor and elixir maker that made elixir's that would cure anything and based on rum.   Today Doc Brown's is producing "Really Bad Rum Cake, Bar B Que Sauce, and rum. All of these are well done and very tasty.  The Dark Rum was their first, a very rich, sweet and smoky, with notes of orange.  The White is a basic honest white rum with nothing added.  Clean and perfect for creating your favorite cocktails.  The third is a spiced rum, based on a two year old rum with notes of vanilla, pepper, honey and clove.  Good balance and not over done. 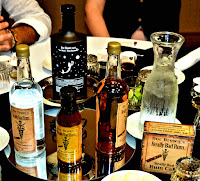 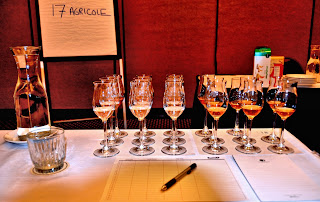 The final session of judging is dedicated to 17 agricoles, six were unaged, 7 aged and 2 flavored,   This was a fun and really enjoyable session.   Agricole are rums that follow the very strict French rules for rum making.  Appellation d'Origine Contrôlée (AOC) is the French set of rules that must be adhered to when making Rhum Agricole.   They are made from pure blue sugarcane juice and are fermented, distilled and aged according to AOC rules. These are what are known as agricultural Rhum and have a very unique flavor that is often an acquired taste.  Once you get use to the aromas and flavors they are exceptional expressions.

Our Final meeting of the day is with Guillaume Lamy and the Plantation Rums from Cognac Ferrand from Cognac, France.  We got to taste the illusive Plantation St. Lucia 2005 and their new Gran Anejo a blend of rums from Guatemala and Belize.     All of the regular suspects were there as well, making the Plantation meeting was the great experience that it always is.  A special thanks to Guillaume, Pancho and Rocky for making the meeting such an enjoyable one.