There Was a Lot More to Prohibition Arrival and Departure, Both Took Some Time

Prohibition has always had an interest for me, having been born in 1946,  There was still a lot of people that lived through the "noble experiment" and it was interesting to talk to hem about it.   My grand Mother and Grand Father were always good to talk to about the subject.  I found this article  to be very interesting. 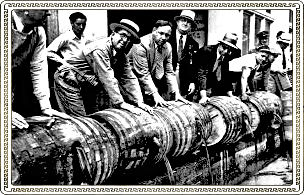 In January 1919, the Eighteenth Amendment to the U.S. Constitution forbade, "the manufacture, sale, or transportation of intoxicating liquors". It came into force exactly a year later, with the National Prohibition Act - usually known as the Volstead Act - setting out the detailed guidelines.   Prohibition had not come out of the blue. The Temperance Movement had been building strong support among the many churches since the early 1800's. Massachusetts was the first state to introduce anti-alcohol legislation in 1838, but it was short-lived. Maine did so more successfully in 1848.

Prohibition was not a success. Organized crime set up large smuggling operations across the Canadian and Mexican borders, as well as managing illegal shipping routes from the Caribbean. Domestic bootleggers began distilling vast quantities of home brew, and medicinal and denatured alcohol were cut and washed for resale - sometimes with fatal consequences. All these products were pumped out through mob-controlled speakeasies and illicit drinking dens. In the space of only a few years, prohibition had given a new breed of gangsters undreamed of wealth and geographic reach. From this solid foundation, organized crime then diversified into narcotics, gambling, prostitution, and finance.

Law enforcement agencies and organized crime gangs battled it out on the streets of American cities. The state's high point came in 1932 when Eliot Ness and his Untouchables from the Bureau of Prohibition succeeded in securing Al Capone's imprisonment for income tax offences. However, by this stage the tide had turned, and the whole violent experience of prohibition had killed off much popular support for the Temperance Movement.

In April 1933, the new president, Franklin D Roosevelt, signed the Cullen-Harrison Act, which legalized beer and wine up to 3.2% ABV. But a framework of far more severe reforms was already in place. On 20 February, Congress had proposed the Twenty-First Amendment, aimed at repealing the Eighteenth Amendment completely and ending prohibition. It was finally adopted on 5 December 1933, and the Eighteenth Amendment was junked in its entirety - the only constitutional amendment in U.S. history to have been ditched wholesale. Prohibition was a 13-year failed experiment, whose main legacy was a sophisticated nationwide criminal infrastructure.

Read More on the subject at http://www.telegraph.co.uk/news/2017/02/20/day-1933-congress-strikes-first-blow-fight-kill-prohibition/
Posted by Bahama Bob's Rumstyles at 6:35 AM No comments: