Bar Brawl Breaks Out Because Someone Farted. 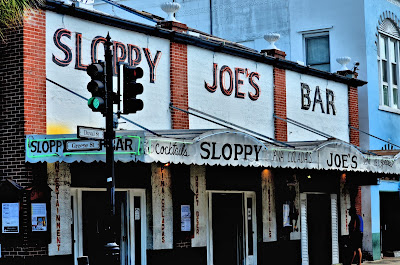 This could only happen in Key West; where else would a fight break out over flatulence.   I guess it is the weather, still rainy from Colin and all.  This is the craziest excuse for a fight that I have ever come across.  When you mix alcohol with stupidity, you end up with this kind of happenings.
A bar fight at Sloppy Joe’s, one of Key West's most famous watering holes wasn't over a spilled drink or sleazy advance on someone's wife, but rather someone’s flatuation (fart) that led to the scuffle.  According to the police report, a fight broke out between two couples this week when someone, remained unidentified, allegedly broke wind inside Sloppy Joe's, on Duval St. Key West, FL.  "The argument was due to someone farting," police were told by Richard McBride, the man who went to the hospital for a dislocated shoulder after the Monday night scrap.
Richard McBride, 53, and his girlfriend Sandra Stoner, 55, both of Naples, said they were caught up in a physical altercation after the argument arose "over a fart," Officer Igor Kasyanenko noted in his report.  The couple said they were drinking with friends at the bar when Stoner traded words with an unidentified woman before getting out of her seat and confronting her in "an aggressive manner," police said.   An unidentified man tried to pull the woman away as others began to step into the dispute, including McBride, who pushed the man, according to the police.   The man retaliated by striking McBride in the face and McBride responded by tackling him, Stoner told police at the scene.       The unidentified couple took off and police said they couldn't find them.
Read More at http://www.keysnet.com/2016/06/11/508726/bar-brawl-breaks-out-breaking.html