A Brief History of "Kill Devil" 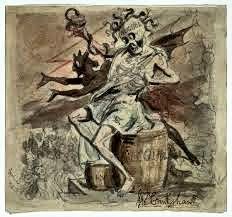 Today it is known as Rum, but back in the days of the pirates and the sailors of the 1700's, it was called "Kill Devil".  Kill Devil or rum was a commodity and would be traded for salted fish, pork, beef, timber and livestock.   Very much  a part of the "Triangular Trade" between the colonies, Africa and Barbados during the era.

During this period, distilleries were found at nearly every sugar plantation in the Caribbean.  Kill Devil was readily available and could be found aboard nearly every vessel sailing on the ocean.  Barbados rum seems to be the first to be called "kill devil", but the source of the name is really obscure.   Most rums originated in the West Indies, Barbados in the middle 1600's , where they were called "kill devil" or "rumbullion".  By 1667, they were simply called "rum",

American Colonists would buy slaves from Africa, and trade them for Molasses to make rum in New England, then trade the rum for more slaves.  The "Triangular Trade" flourished for more that two centuries, but came to an end in the 1880's.   Kill Devil was a valuable commodity and would be protected at all cost. 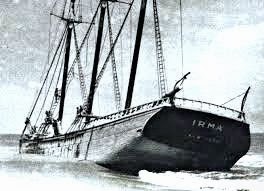 Off of the Coast of North Carolina where the cold waters of the Labrador Current met the warm waters of the Gulf Stream, there are hazards of severe weather, strong currents and navigational hazards that have caused the loss of many ships over the years.  Known as the "graveyard of the Atlantic", there have been thousands of ships documented as having sunken in the area around "Diamond Shoals".   Pirates, Buccaneers and other scallywags were known to sail the waters off of Nag's Head and plunder the bounties from ships in distress around this area.  Pirates would put lights on horses and walk the beach with them luring ships to close to the shoals, where they would run aground and meet up with the marauders that would steal the cargo.  It was this practice that was the basis for the name of the town of Nag's Head.  Much of the rum taken from the ships was taken into the sand dunes and hidden until they could later retrieve it for sale or their own consumption.  These rums were reportedly "strong enough to "kill the devil"  hidden in the dunes of Dare County which was the reason that the area was renamed "Kill Devil Hills".   This is the same area that the Wright Brothers flew the first powered flight as well.

Kill Devil, or rum as we call it today has a very long and glorious history, between the Maritime History and on the land, it is a very refined spirit today compared to the unaged rugged spirit of the days when it was known as  "Kill Devil".
Posted by Bahama Bob's Rumstyles at 7:00 AM No comments: