Genevieve Jodhan, CEO of Laventille-­based rum and bitters producer Angostura Holdings, joined Angostura in 2007, having worked in the logistics and supply chain industry.   After spending almost 10 years in the group’s export and marketing teams, she became acting CEO in 2016, when Robert Wong went on leave, and then took up the role permanently in February this year. Reports speculated that Wong left the group amid controversy, claiming that Angostura’s rums were “under audit”, and accusing the group of “buying bulk rum” then repackaging it for sale “in breach of the EU’s rules of origin”. As such, the reports also called into question Angostura’s rum age statements.
All such criticisms were refuted by Angostura, and a review of internal processes found that all was “in order”, citing compliance with internationally accepted manufacturing standards. Jodhan says that “ironically” the criticism followed efforts to “improve” processes before an ISO recertification. “We implemented more stringent internal audit processes to identify process and paper trail disconnects and gaps,” she says. “Closing those gaps and streamlining our processes meant we had to make changes, structurally at the management level. Organizational changes are not easy, and this resulted in some negative publicity.”
A media storm is not an easy challenge to mitigate when one starts a new job, but Jodhan was enthusiastic about her new role, nonetheless. With her appointment, she became the first woman to lead a large Trinidad and Tobago company outside of the energy sector.   Jodhan says cultivating a diverse workforce is one of her priorities, and stems from discussions that took place in the mid 19­90s when she worked for 3M. “With our marketing team in Angostura, we have swung totally the other way,” she laughs. “Now our marketing department is made up of 80% women.  But it’s more about competency and equality, rather than a ‘let’s only hire females’ attitude.”

Jodhan says her main goal is to elevate the international status of Angostura’s rums and recently launched amaro expression.   While Angostura Aromatic Bitters is the world’s best­selling bitters brand and a back-­bar staple, the footprint of Angostura’s rums outside of its domestic market pales in comparison.   “We make the best­-known aromatic bitters in the world, but hardly anyone knows about our exceptional rum and the Amaro di Angostura,” she says. “So my focus is on accelerating brand building to increase the awareness of the rum and the amaro, and to maintain the position we have in bitters. I want us to be recognized as the world’s leading premium heritage rum brand.   That’s my passion.” Jodhan admits that the brand name ‘Angostura’ has become synonymous with the bitters category, presenting a further challenge in establishing its rums. But, she adds: “That name opened the door for our rums because we do make high quality bitters.”   Despite the international prevalence of its bitters, Angostura’s rums are the company’s “number one line of business”. In 2016, Angostura redesigned its international rum range to communicate its heritage and assert a modern point of difference.
When Amaro di Angostura launched in 2014, it marked the company’s first venture into a new spirits category in its 190­-year history. The new product has “leveraged on the bitters portfolio”, according to Jodhan, with its similar yellow design cues. It uses Angostura Aromatic Bitters as a base, and combines additional spices and neutral alcohol. As Angostura’s stable begins to diversify, is there a possibility of acquisitions on the horizon? “Of course,” Jodhan answers, without divulging any further details. Angostura will also “evolve” its rum portfolio with “different cask finishes” and “develop more complex spirits,” she says.
Based on a 20­-acre complex, Angostura’s distillery has long supplied third­-party rum stocks. However, the company made a “strategic decision” in the third quarter of 2016 to reduce its bulk rum production after a project to upgrade its waste-water-management facilities “didn’t work out as well as we hoped,” says Jodhan. “We started to scope out and ask, how can we produce responsibly? And we realized that we needed to cut back production and make some changes. That led us to look at the entire business model to see where we want to be, then reposition the company for the future.”        Angostura has maintained some key supply contracts, but will reserve greater distilling capacity for its own brands. This change in production strategy has also allowed Angostura to speed up its premium trajectory, focusing more on value than volume, says Jodhan. “We don’t just think it will happen, we intend to make it happen.”   However, she adds: “The future of rum lies in all categories, and mainstream rums are here to stay.   But there is an untapped market at the top end that is wide open, and I think rum will continue to push into areas once reserved for whisky.”
Angostura’s rum portfolio is divided into ‘international rums’ – its premium heritage­-driven expressions – and ‘Trinidadian jewels’ – rums not branded as ‘Angostura’ that dominate the domestic market. As part of a -year strategy that started with the redesign of the international rums portfolio, Jodhan says Angostura may consider expanding international distribution of its ‘Trinidadian jewels’.   “We are looking at how we can move forward,” Jodhan says. “This happens to all companies, and we are looking at what our 10­-year ageing plan will be, and what that range should be.   By January we should be announcing some additions or deletions. But it’s not anything that we are scared of.” 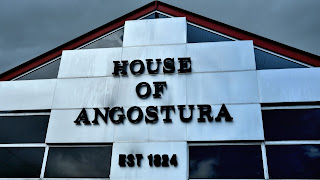 On Angostura’s website, the firm says it wants to be the “most profitable rum company in the Caribbean and continuously improve our position as the largest aromatic bitters company in the world”. But Jodhan says a new ambition will be set in motion. “We have achieved our previous vision. We want to look at the brand portfolio: how we can realign; how we can invest in people and develop talent; then look at any opportunities we may have missed in Trinidad and Tobago.”
One thing that will not change at Angostura, Jodhan says, is the focus on heritage and innovation. “I am fascinated by two almost contradictory threads that define us as a business,” she says. “The House of Angostura is steeped in tradition but we are absolutely driven to innovate. We constantly look at process, packaging and product innovation. Our blenders are continuously looking at new ageing and rum finishing techniques. It is tremendously exciting to live and work at the intersection of these two phenomena.”


Read More at https://www.thespiritsbusiness.com/2017/10/angostura-ceo-rum-portfolio-will-evolve/
Posted by Bahama Bob's Rumstyles at 5:22 AM No comments: