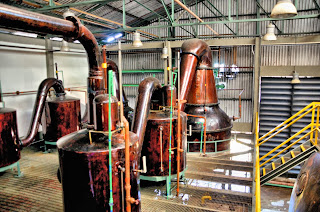 DUSA the Venezuelan rum distiller that produces "Diplomatico" rum was named the recipient of the Golden Rum Barrel at the UK Rumfest last week.    Located in La Miel, Lara in the mountains of Venezuela, this very green distillery produces some of the finest rums in the world.  The honor is a well earned one for the distillery and all of the people there that make the process work.

Tito Cordero,  Maestro Ronero (Rum Master) is only the third Master Blender at DUSA in the company's history.   This very talented man has taken the Diplomatico line of rums to a pinnacle of fine taste and true quality.   His creativity and ability to work out side of the box to create these fine rums  is unlike any other.    The Golden Rum Barrel award for distiller of the year was well deserved .

“This year’s Golden Rum Barrel Awards plays tribute to the pioneers within the industry whether blend or being,” said Ian Burrel, founder of the UK Rumfest.
“Rum’s rising popularity throughout the world can be attributed to many of these esteemed individuals or brands and we are thrilled to announce such an incredible range of distillers, master blenders, ambassadors and rum blends from all over the world.” 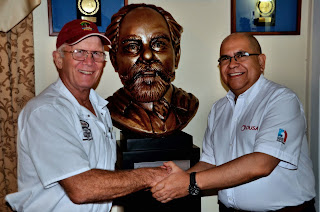 DUSA and Tito Cordero are responsible for such wonderful rums a Diplomatico Reserva Exclusiva, Ambassador, Single Vintage 1997, and 2000, and the rest of the Diplomatico Line of fine rums.
I would like to pass on my personal congratulations to my friend Tito Cordero and the rest of the people that make everything happen at DUSA.  Keep the fine rums coming .  I just can't tell you how excited I am about tasting your new Single Vintage 2000 later this year.   ;o)
Posted by Bahama Bob's Rumstyles at 8:14 AM No comments: