It is said that Queen Elizabeth's favorite cocktail is gin and tonic with a dash of Angostura Aromatic Bitters.   The preparation has a long history that was started by Dr. Siegert in 1872.  Developed in his lab located in Trinidad, he developed the bitters as a digestion aid, but became the seasoning for the world's cocktails as its true legacy.

Bitters are made much like coffee is by percolating hot water over the ground up barks, herbs and grains in the basket.  The actual formula is a closely guarded secret, but resultant bitters do wonders for many of today's cocktails.    Making of the bitters is a relatively simple process that takes up only a small corner of the "House of Angostura". 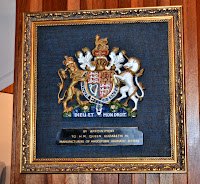 The House of Angostura is by appointment of Queen Elizabeth II the manufacturer of Angostura Aromatic Bitters.   There is a special "Diamond Jubilee" edition of the bitters that was made in very limited quantities for her 50th annaversary as the Queen of England. 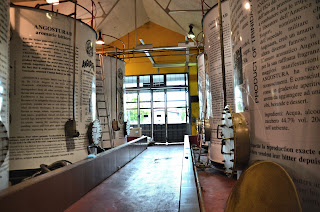 The Aromatic Bitters is only a small portion, but the basis of what is now one of the largest manufacturer of rum and the aromatic bitters in the world.  I found the tour and the simplicity of the operation to be very interesting.   It is always a wonder to me how a simple idea can grow into a huge success like this one has.   ;o)
Posted by Bahama Bob's Rumstyles at 8:50 AM No comments: