Rum From the Far East?

Sounds strange I know, but when you hear the rest of the story, it all makes sense.   Most people think of the Caribbean when the subject of sugarcane is brought up, but sugarcane has its origins in New Guinea.     Sugarcane was first domesticated about 8000 BC in New Guinea and spread rapidly all over Southeast Asia, China and India.   Christopher Columbus carried sugarcane seedlings to the "New World" in 1493 on his second voyage.   Most of the Columbus influence as far as sugarcane was concerned was in Hispaniola.

It always seems to follow where sugar is made, rum is soon to follow.   In 1854, Tanduay Distillers was established, today the second largest producer of rum in the world, second only to Bacardi.   Tanduay is located in the Philippines and makes its rum from molasses produced at their own sugar mill.   Victoria's Milling Company produces sugar and molasses from the Negros Sugarcane which is a directly descended from the noble and wild varieties from New Guinea.  Tanduay is also very proud of their small Eco footprint and very green operations that have won them international green awards. 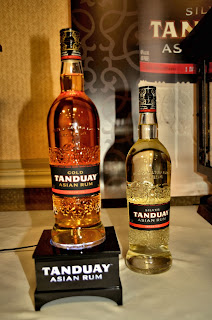 Today Tanduay Distillers is producing many fine spirits.  In addition to their Rums, Gin, Asian Beer, they own bakeries and airline businesses.        Tanduay is bringing two different rums to the United States, a silver and a gold.  Both are 5 pass column distilled and aged in various types of Oak barrels for many years.  This process creates the uniquely complex rum that boasts a range and depth of flavor.   Winner of over 100 medals internationally for their rums in the past 40 years and received their first gold in Paris in 1876.

The amber color of the gold rum leads you to an intriguing nose of creme burlee and caramel.  On the palate, this medium bodied rum exhibits fruit, vanilla and oak notes, finishing with a warm, peppery, nutty and fruitiness.   It seems that Asian rum can be pretty darn good.  Tanduay is not the second largest producer of rum through some fluke, the make a very nice product in both the gold ad silver rums.   These rums will be on the shelves as early as June or July this year.  The rum will be priced at the $20.00 range.  There is a "Heritage XO" coming soon, that will be priced in the mid $30.00 range..

Give these rum a try, they are legitimate fine rums that might surprise you.   ;o)
Posted by Bahama Bob's Rumstyles at 8:34 AM No comments: