Frozen Day in the Rum Lab

The Rum Lab suffered from Thanksgiving preparation yesterday, in that many of the usual mice were unable to attend.     We proceeded with the experimentation with an abbreviated staff, but the results were very encouraging. 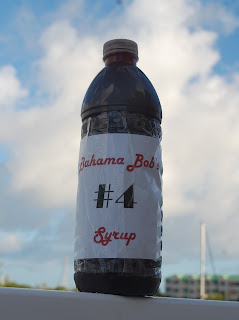 The big gain of the day was the new Bahama Bob's #4 Syrup.     This new syrup was concocted from the ideas developed in #3 Syrup, but with a different group of spices to flavor it.     This time the syrup was simmered for about a half hour before allowing it to cool and be bottled.    It has a better texture and a very exciting flavor profile attained from simmering the mix.     Again the recipe will be in the book for all of the Bahama Bob's Cocktail Syrups.

Frozen drinks was the subject matter for the Rum Lab yesterday.   We tried some different frozen cocktails ideas that proved to be very exciting.     We tried to work some of the Tiki Style ingredients into some frozen drinks that would yield  the usual watered down frozen drinks when a regular cocktail is put into the blender.    We found that it took very bold flavors to make a good frozen cocktails that were rather was flavorful from start to finish.     This approach eliminated that end of the frozen drink watery slush.

Frozen Tiki
Place all ingredients in the blender with ice and blend until smooth.     Serve in a pint glass and garnish with a sprig of mint and an orange wheel.

This different approach was taken with many different ingredients, and the bold ones were the ones that really worked well.    We even took a can of "Libby's Skinny Fruit", a tropical salad, and pureed it into a frozen cocktail using rum, and lime juice.    This looked and felt like a smoothie with a little bit of a rum kick to the finish.     We found a lot of different ideas that we will pursue next week as the research goes ahead to the next level.     ;o)

Posted by Bahama Bob's Rumstyles at 8:21 AM No comments: