Happy Repeal Day:79th Anniversary of the Repeal of Prohibition The end to all evil was the cry in 1920 when the 18th Amendment to the United States Constitution was enacted.   The voice of the temperance groups felt that the prisons would be used as corn cribs and warehouses and there would be no more slums.   The feeling among the temperance groups was that there was a better chance of "a hummingbird flying to Mars with the Washington Monument tied to his tail" than Congress repealing the 18th Amendment.    Initially there was very heavy support, but with the passing of time, the country had become very disillusioned with the "Nobel Experiment".

There was actually less respect for the law leading to new and more  serious social problems were appearing.   Journalist H. L. Mencken wrote in 1925 that "Five years of prohibition have had, at least, this one benign effect: they have completely disposed of all the favorite arguments of the Prohibitionists. None of the great boons and usufructs that were to follow the passage of the Eighteenth Amendment has come to pass. There is not less drunkenness in the Republic but more. There is not less crime, but more. There is not less insanity, but more. The cost of government is not smaller, but vastly greater. Respect for law has not increased, but diminished."

The Volstead Act granted both State and Federal authorities to enforce Prohibition.  Montana became the first state that chose not to enforce Prohibition in 1926.     Prior to Prohibition, saloon keepers could loose their license if they were caught serving minors, but in the speakeasy's of the Prohibition era, you could find teens regularly consuming alcoholic beverages.   What was "moderate drinking had become binge drinking", combined with the growth of the mob violence, public intoxication, corruption, and a huge growing disrespect for the law, all the things the 18th Amendment was suppose to cure had gotten worse instead of better. 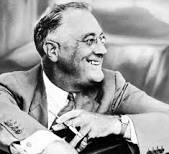 There were a large number of repeal organizations appearing as the disillusionment and dissatisfaction with the "Nobel Experiment" grew.   There was even an anti-Prohibition plank in the platform of the Democratic Party Platform in 1932 and Franklin Roosevelt ran for the president promising repeal.    The popular vote for repeal ran 74% for Repeal and 26% against.  The American public ended Prohibition by a three to one margin and December 5, 1933 Prohibition was over. 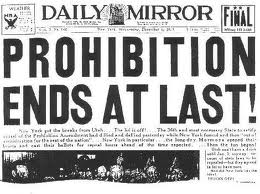 The 21st Amendment had two parts, the first repealed the 18th Amendment, and Part two made it illegal to import, manufacture, transport, and sell intoxicating beverages into states, territories or possessions of the United States that had laws prohibiting them.  The catch was part two, it gave the individual states, cities, counties, the right to enact their own set of rules and regulations.   Today the results of this section of the 21st Amendment is still very much in control of the spirits industry.  Every state has a different set of rules and many of the counties within the state have another set of rules. 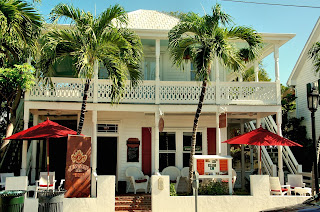 Today 79 years later we can celebrate the fact that the one time speakeasy called the "Florence Club" is now one of our favorite "watering holes" that you can enjoy a cocktail at without the fear of being busted for being where "intoxicating beverages" are being sold.   It also means that I have a job and can make you those fun tropical concoctions that we all know and love.   Enjoy Repeal Day 2012.   ;o)
Posted by Bahama Bob's Rumstyles at 8:19 AM No comments: