Kilo Kai: Created by a Knight and the Pride of Curacao's 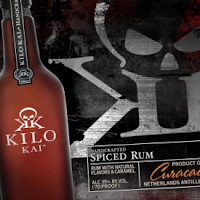 Don Leanez, was the guy that started distilling rum on Curacao, a little island in the Southern Caribbean.     Don was said to have been knighted by a Dutch queen for the work he did for the island.     Like hes grand father and his father before him Angelo, the master distiller at Kilo Kai loves the rum and the challenge of making fine rums for today's market.

Careful attention to the distillation process is a big part of what makes this a special spiced rum.     The ability to separate the "heart of the distillate from everything else" is just one of the attributes of this rum.   The scents and flavors of vanilla, Cinnamon, and nutmeg are right in front of you as you approach the glass.    When the rum passes over the palate, the flavors explode and the semi-sweet well balanced taste passes to a smooth and pleasant finish.

The rum is matured in oak barrels for three years giving it ti's golden brown color.     This is a rum that can be enjoyed neat, on the rocks, or mixed in a cocktail, any way you choose it it is a rum that needs to be in your spiced rum collection.     ;o)
Posted by Bahama Bob's Rumstyles at 9:38 AM No comments: