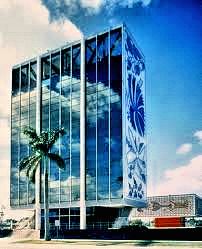 Bacardi USA has sold the the "Jewel Box" and the eight story tower located at 2100 Biscayne Blvd.    The "Tower" was designed by Engique Guterrez and built in 1963; and the "Jewel Box" by Ignacia Carrera-Jiustiz in 1975.   The two buildings were sold to the National Young Arts Foundation, an organization that finds and encourages your artists from 15 years old and older; then assists them through the complex stages of their educational and professional development.     These buildings will be converted into the first national headquarters for National Young Arts Foundation.

The two buildings covering 3.3 acres on Biscayne Blvd. have served as Bacardi's headquarters and museum until the opening of the new "America's Headquarters" in Coral Gables in 2009.  After the move, the Biscayne Blvd. campus was only used on rare occasions. 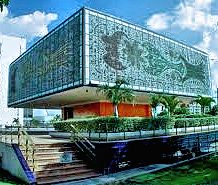 "If we ever had to let go of these buildings, all of us at Bacardi knew we wanted to ensure they would continue to be shared with the South Florida community. The heritage and significance of these buildings will be with Bacardi forever."    "We were looking for somebody to extend the legacy of the property and how much it means to us," he told the Florida newspaper. "I don't think we could've come up with a better partner."
Frank Gehry has been commissioned as the design master for the iconic Bacardi campus.   The plan calls for the preservation of the two buildings exterior and creating a multidisciplinary arts complex that include a park with the latest video projection equipment and arts programming.
"As much as our remarkable young artists need space to work, to learn and to present their achievements, they also need surroundings that inspire them," said Young Arts founder Lin Arison. "This campus is a place that can make their spirits soar and their ambitions a reality."
This is a great use for the dormant campus that will makes sure that this icon is going to be able to survive the future, but be of a great value to the community and the nation.   ;o)


Posted by Bahama Bob's Rumstyles at 8:55 AM No comments: