The Rise of the Caipirinha, the Unofficial Cocktail of the Olympics

A few years back when the World Cup Soccer games were being held in Brazil, the Caipirinha was all the rage and Cachaca was flying off of the shelves even here in the United States.   Here we go again, this time it is the Rio Olympics and everyone is all about the Caipirinha again.  Today here in the United States, the most readily available are Leblon and Ypioca Cachacas, but if you can find it, Avua, Sabastiana, and Novo Fogo are some of the finest quality ones.

Brazil has been turning sugarcane into distilled spirit for at least as long as anyone in the Western Hemisphere and quite possibly longer. Portuguese colonists planted sugarcane there as early as 1520 and by 1535 one Erasmus Schetz, from Antwerp, was turning the stuff into booze. By 1585, there were 192 working distilleries. That number would only go up: in 1629, it was 349. Today, the common estimate is 5,000. Estimate, because nobody knows for sure:

The Caipirinha is a really great cocktail, closely a kin to the Daiquiri and Ti Punch.  It is a very refreshing cocktail that is given its unique flavor by the Brazilian Spirit Cachaca.   Cachaca is made from fresh squeezed sugarcane syrup and presented after distillation in many forms from the very raw high proof and unaged expressions to the ultra premium aged.  The friendliness of the cocktail is directly related to what you make it with. 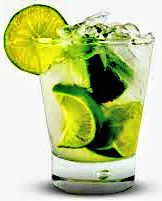 Place Lime wedges and sugar in a shaker and muddle.  Add the Cachaca and ice, shake until until chilled and pout into a large "Rocks Glass" with a sugar in the raw rim.  Garnish with a lime wheel.

Posted by Bahama Bob's Rumstyles at 5:45 AM No comments: