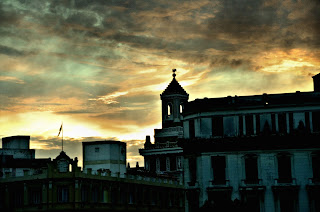 Staying in the Telegrafo Hotel with its view of Central Parque in Havana brings visions of the "hay days" of Havana during the 30's through the 50's.   Between the cars and the architecture of the buildings it is like being in a "time warp".  From sun rise to sunset it is a breath taking sight.   Looking out toward the Bacardi Building and the Plaza Hotel to catch the first rays of sunlight in the morning, the city seems to come alive right before your eyes. 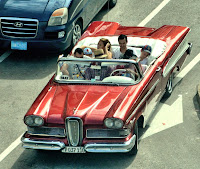 Watching the people beginning to start moving around, the buses and taxi's begin to bustle up and down the street, you come to life watching the 1950's American cars moving down below on the street.  I found myself staring out the window from the fourth floor just wondering what would draw past catching my eye this time.   It was almost like I was watching the television instead of looking out the window.   The light shining on the buildings change the entire mood of the parque constantly.   I was thirteen years old when Cuba became one of the "forbidden fruits", it has taken until I was sixty-six to finally be able to see why people were so enamored with this magic city. 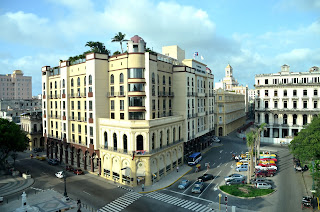 Early afternoon brings the light from the west giving the parque an entirely different look.  It glistens and begins to get the look of being ready for the party of the night to begin.  This time of day reminds me of postcards from the 30's and 40's of the hotels and fun places that all seemed to say "having a wonderful time wish you were here". 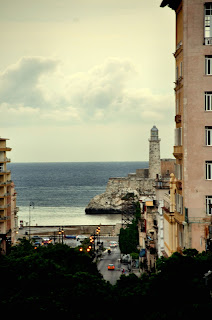 As I look to the left down the "Prado" I see the entrance to Havana Harbour and the old fort and lighthouse that protected it.  The blend of the 1800's with the middle 1900's makes for a very picturesque sight.   What I find about the window is that it is almost like having a very special window on the world that takes you back to the era of your childhood, and get to see many things that you otherwise only get to remember and do not get to see any more.

This well preserved piece of history is around because of the way things were done in this country in the past.  Buildings were built to last forever, and even though there has been very little money for maintenance in the past couple of decades, the city is surviving very well.   With the advent of more and more tourist dollars arriving, there seems to be more and more of the buildings being restored and brought back to their previous glory and beauty. 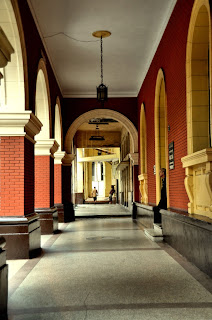 This is a city that needs to be seen to believe.  After my second visit, I can hardly wait for the next opportunity to travel back and find new sights that I have never seen in this infatuating place .   Every alley or covered sidewalk opens up into a plaza or parque to spin you around again and again.

Eventually it will be open for the easy 90 mile trip from Key West and everyone will be able to cross the Florida Straits and spend some very special time in the magic that has always made Cuba a draw for the American people.   ;o)
Posted by Bahama Bob's Rumstyles at 8:15 AM 1 comment: