The Aroma of Alcohol Eases Your Inhibitions

New research has revealed that the smell of alcohol makes it harder for people to control their behavior. 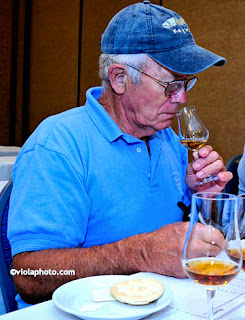 Here is another of the interesting studies on how alcohol effects us.  This time it is the smell of alcohol.  I know that when I visit a distillery the smell of alcohol makes me very happy, but I love the smell of rum anyway.   This is an interesting read.
Researchers at Lancashire’s Edge Hill University found that during a computer-based study the smell of alcohol interfered with people’s ability to refrain from a particular behavior.  Participants wore face masks that were pre-treated with either alcohol or a non-alcoholic citrus solution.
They were then presented with two picture sets – one containing the alphabet, the other made up of bar-related images – and were asked to press a button when either the letter K or a picture of a beer bottle appeared on their screen.   The scientists measured the amount of times the participants incorrectly pressed a button, raising a ‘false alarm’, which indicated a decrease in the person’s ability to inhibit their behavior.
The number of false alarms were “significantly higher” in participants who were wearing the alcohol treated mask, and the effect was the same for both alcohol and non-alcohol-related visual cues.   A statement from the study reads: “The current findings support the findings of previous research that exposure to alcohol-related stimuli results in reduced accuracy in tasks requiring inhibitory control.
“Overall, this research offers an original insight into the importance of acknowledging olfactory alcohol cues in developing a comprehensive understanding of alcohol-related behavior. Context-related reductions in inhibitory control may lead to increases in consumption, or to relapse in abstinence users”
The study, called Smells like inhibition: The effects of olfactory and visual alcohol cues on inhibitory control was published in the journal Psychopharmacology.

Read More at http://www.thespiritsbusiness.com/2016/03/study-finds-aroma-of-alcohol-inhibits-self-control/?article-source=newsletter&source=651&date=2016-03-18
Posted by Bahama Bob's Rumstyles at 6:16 AM No comments: