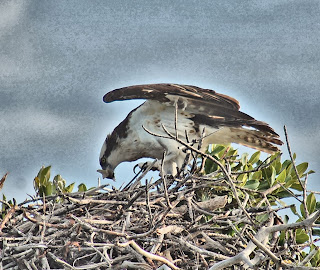 One of the most impressive sights that I see around the marina and out on the water here in the Florida Keys is an Osprey swooping down and snatching a fish from the sea.   These beautiful brown and white birds are a pretty common sight around the waters of Key West and the surrounding mangrove keys.

These birds can be spotted at the very top of structures, masts, or trees that overlook the water.    Their nests are easily spotted, usually an interwoven stick structure lined with moss or grass at the top of a tree, tower or nesting platform.   The nests look much like those of a Bald Eagle, but smaller in size.  In the mangrove keys out away from any population Ospreys have even been known to to nest on the ground or at the top of a mangrove.    The Ospreys here in the Keys usually nest in the months of late November through Late February 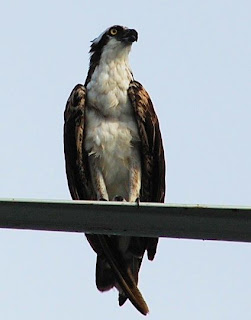 These birds are excellent anglers, they sit on a high perch like a sailboat mast and watch the waters until they spot their prey and then they swoop down and grab the fish from the water and fly back to the nest or a high perch to devour their prey in safety.   Seeing one of these impressive birds in action is something that you will not soon forget.  They have a wingspan of five to six feet with brown and white plumage that is easily spotted in flight, but do blend in while on the nest. 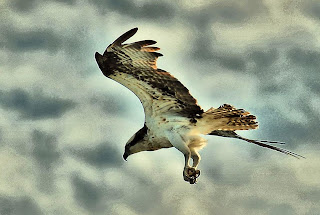 Osprey's like other eagles do mate for life.  There were thought to be some 1500 to 2000 pairs in Florida, but there has not been a good survey of the population since the early 1980's.    The shoreline development has caused a disappearance of  nesting and hunting grounds, that is believed to cause a loss of some of the Osprey and Bald Eagle population.   There have been a lot of work done by Florida power and communications companies providing nesting platforms on the tops of power poles and cell phone towers.  All of these efforts are helping  this fascinating bird survive within our population zones.