This battle seems to just keep going on and on.  It looked like it was over in 2011, but with the warming up of relations with Cuba and the reissuing the trademark back to Cubaexport and Pernod Ricard it looks as if it is ramping up to be a full scale battle of two rum giants.   Getting their brand back into the United States is critical for Havana Club if it is going to get back to the top of rum sales in the world.

The rum war with Cuba, which makes its own Havana Club, heats up  Cuba still is registered owner of Havana Club trademark in the United States.   Bacardi claims it owns the mark and is backing it with a splashy new ad campaign   Cuba may have won the latest salvo in the trademark battle over who has the right to use the Havana Club rum brand in the United States, but that isn't keeping Bacardi from rolling out nationwide distribution of the iconic rum brand with a splashy ad campaign that calls you back to the island's "golden age."

Bacardi, which contends it is the rightful owner of the Havana Club name because it purchased it and the rum recipe from the family that made the rum in Cuba prior to the 1959 Revolution, plans to kick off its new marketing strategy Wednesday with the introduction of Havana Club Añejo Clásico, a dark rum, and its "The Golden Age, Aged Well" advertising campaign in Florida.     Among the tag lines for the new campaign are: "Even a Revolution Couldn't Topple the Rum," and "The Freedom, The Decadence, The Dazzle, The Glamour. If Only Someone Had Bottled It."   Through the summer, the new dark rum, which is double-aged in oak barrels for one to three years, and Havana Club white rum, which are distilled in Puerto Rico and bottled in Jacksonville, will be introduced in new markets across the United States.

Because of the interest in all things Cuban with the resumption of diplomatic relations between the United States and Cuba, "it's a good moment to introduce a new generation" to the brand, said Fabio Di Giammarco, global vice president of rums for Bacardi. "It's an exciting time for us and the Havana Club franchise in the United States.   But with the recent resurgence of U.S. travel to Cuba, many Americans have already been discovering another version of Havana Club, the one distilled in Cuba and distributed worldwide by a partnership of Cubaexport and French spirits maker Pernod Ricard. 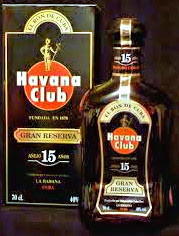 While American travelers can now purchase a combined total of $100 worth of alcohol and tobacco products while visiting the island, the embargo against Cuba still precludes the sale of Cuban Havana Club or any other Cuban rum in the United States.   The day when the embargo is lifted and Cuban rum can be exported to the U.S. market is what makes the trademark so valuable. Bacardi and Cuba have been fighting over it for the past two decades in U.S. courts.

Cubaexport, the Cuban rum company, and Pernod Ricard contend the "authentic" Havana Club rum is made in Cuba.   "Havana Club is the true spirit of Cuba: a genuine Cuban rum produced in Cuba from Cuban sugarcane," said Apolline Celeyron, a spokesperson for Pernod Ricard. "If the U.S. embargo on Cuban products is lifted, we'll be the first company to offer a true Cuban rum to our American neighbors."

But the tide turned in mid-January, when the patent office renewed Cubaexport's registration of the Havana Club trademark.   Now the two sides are back in U.S. District Court in Washington, D.C., fighting over ownership of the trademark, and Bacardi is reinventing its version of Havana Club.

Bacardi has asked the court to reverse Cubaexport's trademark registration and declare Bacardi the rightful owner of the common law rights to the Havana Club name, said Rick Wilson, Bacardi's senior vice president of external affairs and corporate responsibility. Common law, he said, "for the most part is based on usage." So Bacardi's Havana Club is going national.   There will be new vintage-style packaging featuring the Arechabala family crest, which was used on the family's rum packaging and advertising beginning in1934, and a portrait of the company's founder.
Posted by Bahama Bob's Rumstyles at 5:45 AM No comments: