The rum and other spirit producers are put into an expensive hard spot with the cost of aging their spirits for at least one and up to 50 years in order to give them their smoothness and finished flavor.  Can this process of putting rum into a barrel and letting it sit be sped up a bit and still yield the fine quality expressions?   This is one of those questions like the alchemist turning lead into gold, can it really be done? 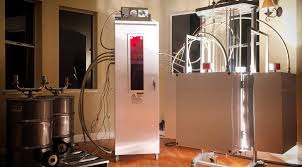 Bryan Davis says, “We haven’t made something approximating the flavor of aged rum, we actually made aged rum.   Our technology is the only one that can stand up to forensic chemistry as there’s a big difference between just replacing parts of the process with creating a molecule-by-molecule map.”   During mid-2010 Davis discovered how to catalyze the first part of the aging process, esterification and in 2015 they produced rum that had a near-identical chemical signature to rum aged in a barrel for 20 years. The liquid was only six days old.   There has been only limited acceptance of Davis's process by the industry in general, but the results are very impressive.
The folks at Lost Spirits of Charleston, South Carolina believe they have come up with a way to molecularly alter the spirits in six days giving it the same flavor as 20 years in the barrel.


There are several other ideas that are being used to speed up the maturation process that have had some success and are in use by many in the industry.   One of these is to add additional oak pieces to the inside of the barrel exposing more of the rum to the wood as it sits in the barrels.   Cruzan uses this process to enhance the aging of their premium rums.  Another method is to place the barrels into the ocean where they are in motion constantly placing all of the rum into contact with the wood.  Cayman Spirits uses this method to make their Seven Fathoms Rum.  They feel that they are getting results by this method that gives them the a product that shows characteristic of a rum that has spent more than the 2 years that Seven Fathoms spends in the barrel.


For the past six months I have been experimenting with several ideas that I have come across over the past years around the business.   I was given a small 1 1/2 gallon cask by Plantation a couple of years ago and I've been using it to test some of my ideas.  After filling it with sea water to swell the slats back up and then flushing it with fresh water, I placed a couple of rum samples that I was given to see how they would age.  I also added about 3 cups full of cubed retired rum barrel pieces that I had soaked in Rhine Wine and agave nectar until the became saturated and sank to the bottom of the bottle.

What I found about this small virgin barrel and the charred oak barrel cubes is they started working on the rum very quickly.  Because some of the rum had been in barrels before, it became very oaky very quickly.  I began to question what I had done, but before giving up on this I got 3 liters of high proof pure white rum to put into the barrel.  After flushing the barrel to get rid of any of the residue of the previous experiment I put the new rum into the barrel.   After a week, I was starting to get some pale color and an indication of the wood in the flavor.   Today the rum has been in the cask for seven weeks and it really has a nice medium mahogany color and very flavorful taste.  It has a smoothness that really surprised me and leaves a subtle taste of the wine at the finish.  The other thing about this experiment is that the barrel sits on my boat.  The waves from the wind and the other boats that pass by means that the barrel contents are being sloshed around inside the barrel.

I realize that this is a small scale experiment, but for a start-up craft distillery, the use of small casks with cubes of oak in the barrel can help to get some finished rum to their customers more quickly.  When you put a lot of oak together with higher proof rum and keep it in motion the reactions will happen quite a bit faster than in a large barrel that sits untouched.

All of the methods of speeding the aging process have merit, but only the future will tell if they become the norm for aging rum.


Posted by Bahama Bob's Rumstyles at 5:54 AM No comments: