Rum during the Colonial times here in America was still for the most part in the "Kill Devil" quality.   It really had to be mixed with something to be drinkable.  This was the birthplace of some very interesting cocktails from the era.

Flip was a vastly popular drink, and continued to be so for a century and a half.  I find it spoken of as early as 1690. It was made of home-brewed beer sweetened with sugar, molasses, or dried pumpkin, and flavored with a liberal dash of rum.  It was stirred in a great mug or pitcher with a red-hot loggerhead or bottle or flip-dog, which made the liquor foam and gave it a burnt bitter flavor.

Landlord May, of Canton, Mass., made a famous brew, he would mix four pounds of sugar, four eggs, and one pint of cream and let it stand for two days.   When a mug of flip was called for, he filled a quart mug two-thirds full of beer, placed add four great spoonfuls of the compound, then thrust in the seething loggerhead, and added a gill of rum to the creamy mixture.   If a fresh egg were beaten into the flip the drink was called "bellowstop," and the froth rose over the top of the mug. 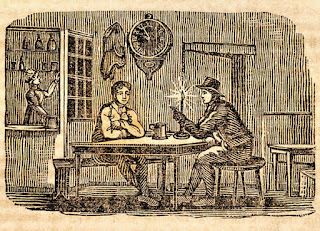 "Stonewall" was a most intoxicating mixture of cider and rum. "Calibogus," or "bogus" was cold rum and beer unsweetened.  "Black-strap" was a mixture of rum and molasses. Casks of it stood in every country store, a salted and dried codfish slyly hung alongside, a free lunch to be stripped off and eaten, and thus tempt, through thirst, the purchase of another draught of black-strap.

No one knows, or ever will know, what New England rum tasted like.  The generic roots of rum extends deep into the misty past before there were bottles and labels and such.   This is probably a blessing if some of the written descriptions of the early rums are even close to being true.

Posted by Bahama Bob's Rumstyles at 5:52 AM No comments: