"Sherry is more than just your grandmother's drink for so long that the conceit itself seems old enough to be your grandmother. And yes, the fortified wine-made from grapes grown in Andalusia, Spain, and allowed to mature in a series of oak casks-has, over the last several years, entered heavy rotation among bartenders with a sense of history and a taste for well-aged ingredients. Yet, in the hearts and on the home bars of a large number of their customers, Sherry has yet to regain a foothold. "


There is a reluctance due to the misperception that all Sherries are sweet, but this is not so.  There are only a few of the wide range of styles that are actually sweet.    For mixing, Sherries that come from the dryer end of the spectrum mix well.   For many years now, rums have been aged in portion in the sherry barrels from Don Pablo Pedro Ximenez, although this is one of the sweeter Sherries, the idea for mixing sherry with rum seems like a viable idea.   The dry Sherries have a natural, but subtle sweetness from their aging process that make the mixing with rum work out so well. 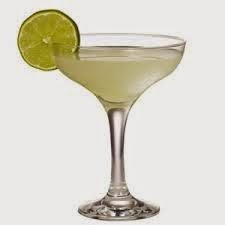 
Place all ingredients into a shaker filled with ice cubes and shake until chilled, strain into a chilled cocktail glass and garnish with a lime wedge.


I really like the way that the rum and the dry sherry play very well together in the daiquiri.  This is a dry daiquiri that gives you a full bodied blend of flavors that both the sherry and the rum contribute to.   If you need a bit of a sweeter cocktail you can add a sweetener to the mix.  This is my first exploration into the blending of Sherry and Rum, but I feel like there is a real good series of cocktails that can come out of this latest Rum Lab experiments.  ;o)
Posted by Bahama Bob's Rumstyles at 7:00 AM No comments: