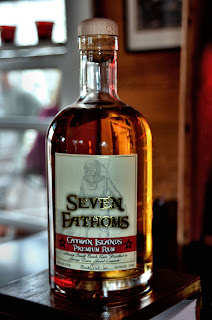 This is the pride of the Cayman islands, a small batch rum produced by the Georgetown Harbour Distillery and aged in "Seven Fathoms" of water.    This is the first spirit that is produced entirely in the Cayman Islands.

The concept of aging rum underwater has some very strong merits.  The constant motion of the ocean keeps the rum "stirring in the barrels causing it to age quicker.  The temperature at this part of the ocean is very constant making for a more consistantmaturation process.  All of these factor come to light with this fine quality rum.  The sealing of the barrels and the location of the "Aging Bodega" are highly guarded secrets as one might expect.

The rum has a light mahogany color that is clear and stunning.   The nose says vanilla, nutty and maybe some fruity scents.   On the Palate I pick up some vanilla, sered oak, with a spiciness and an amount raisin flavors.   This leads to a dry finish with hints of spices.

This is only the beginning for the people at Seven Fathoms, and a great effort for them getting into the world of rum.   Unfortunately it has not arrived for sale into Florida yet, so it will be a while before I have it at the Rum Bar.  I have a good friend that brought back a bottle from Grand Cayman this week and I got to taste it yesterday.  Hope to see it soon here in the states.  I'll be stopping by the distillery in July when I visit Grand Cayman as well.  I'm hoping to be able to serve Seven Fathom Rum in the near future at the Rum Bar.  ;o)
Posted by Bahama Bob's Rumstyles at 6:24 AM No comments: