There is controversy over The Goombay Smash's origin as well as the origin of many other popular cocktails.     Smashes are not a new concept, the early ones resembled a mojito, and were made with gin, rum, or whiskey.   The more modern ones contain fruit juices and are made for the most part with rum.      The most popular and probably the most believable of the stories of who created it is that Miss Emily at the Blue Bee Bar in New Plymouth, Green Turtle Cay, Abaco, the Bahamas was the originator.     The other is it was created a fellow named Bernie at a bar in Killington, Vermont Ski Area.     You get to believe which of the stories is true for you, but as for me and on the strength of having had a Goombay Smash at Emily's Blue Bee Bar, and the volume of places in the Bahama's that serve their interpretation of the drink it is hard to believe that it was created anywhere else. 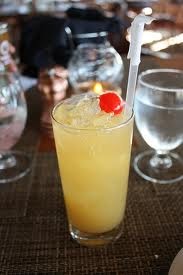 This is one of those drinks that has as many versions of the Goombay Smash as there are bartenders.     There are 3 common threads in the majority of them, Coconut Rum Apricot Brandy, and Pineapple Juice.     From there the recipes vary tremendously.      The drink as a light and flavorful touch that brings together several flavors in a very refreshing and harmonious fashion.      The drink is to the Bahama's what the Painkiller is to the Virgin Islands, you will find them at every bar and slightly different in the ingredients they contain, but most of them are very good.

The rum specified for this drink is usually a "dirty rum" meaning a amber or dark rum, but it could also mean a spiced or gold rum.   That term seems to fit any rum that isn't a blanco or white rum.     The original recipe is a secret, but it is believed to contain:
Many of the interpretations that I have run across in the Bahama's, the Virgin Islands, as well as in the United States is something very close to this:

All of the ingredients are shaken in a shaker with ice and poured into a Collins glass and garnished with a orange and a cherry.

There are, like I said as many recipes as there are bartenders, so find one that fits you and sit back and enjoy it.     By the way thank Emily for this fine cocktail if you should happen to get by the Blue Bee Bar.   ;o)
Posted by Bahama Bob's Rumstyles at 9:56 AM No comments: