Tonight we move our clocks ahead 1 hour here in most of the United States.  This in my mind marks the beginning of Spring.   It is a great day, because I'm getting to enjoy more water time in the evenings and less stress returning to the boat after the Hurricane Hole evenings.

This is a custom that first appeared in Germany.   They became the first to introduce Daylight Savings Time when clocks were turned ahead 1 hour on April 30, 1913.  Their rationale was to minimize the use of artificial lighting in order to save fuel for the war effort.   The idea was quickly followed by the United Kingdom and many other countries, including France. Many countries reverted back to standard time after World War I, and it wasn’t until World War II that Daylight Savings Time made its return in most of Europe.

Here in the United States, Daylight Savings Time or “Fast Time” as it was called then, was first introduced in 1918 when President Woodrow Wilson signed it into law to support the war effort during World War I. The initiative was sparked by Robert Garland, a Pittsburgh industrialist who had encountered the idea in the UK. Today he is often called the “Father of Daylight Saving”.   Only seven months, later the seasonal time change was repealed. However, some cities, including Pittsburgh, Boston, and New York, continued to use it until President Franklin D. Roosevelt instituted year-round Daylight Savings Time in the United States in 1942. 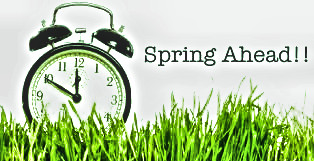 There is talk here in Florida of Daylight Savings Time becoming the year round time, an idea that I could really get behind.  No matter, just remember if it applies n your local to move your clock ahead tonight.

Posted by Bahama Bob's Rumstyles at 5:33 AM No comments: