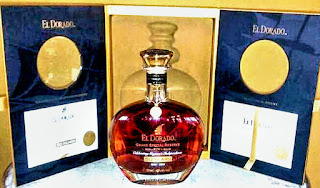 Demerara Distillers Limited on Monday unveiled its El Dorado Grand Special Reserve, a 50-year-old rum with an 18 carat premium Guyanese gold medallion.  This special edition is in honor of Guyana’s 50th Independence Anniversary. This edition, fondly called “Liquid Gold”, is not only special, but is limited; there are only 600 bottles up for sale.   “I believe this is the best bottle of rum money can buy anywhere on planet earth,” Samaroo further posited.

President Granger, in applauding Demerara Distillers Limited on maintaining a rich historical legacy within the rum industry, not only locally but internationally, said: “Guyana’s Rum Industry thrives because it is committed to high standards and quality assurance; it has devoted the time, the energy, and resources necessary to developing a strong brand.” 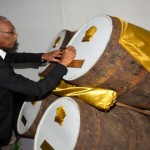 Four casks were signed by President David Granger, the three containing El Dorado 50 Year Old Special Reserve Rum, will be placed into storage for another 25 years, the other cask will be filled with mementos.   These casks will be opened when Guyana celebrates its Diamond Jubilee, in the next 25 years.
Before handing over the first bottle of the limited edition rum, Samaroo explained that “each bottle of the 50th Anniversary Rum has an 18 carat gold pendant with an El Dorado Logo specially crafted by a Guyanese jeweler.”   He further explained that each of the 600 specially crafted bottles of rum was certified by the Master Blender, Sharon Sue-Hang.   “The selling price is $500,000 per bottle plus Sales Tax,” he posited.


He noted that $100,000 from each bottle sold will be donated to the Demerara Distilling Ltd. Foundation to assist young, bright but unfortunate Guyanese in acquiring a high standard of education.

Two-thirds of the blend of the Special Edition comes from barrels of rum that were distilled on the transferred still, known as the Port Mourant Still, and laid down to preserve in 1966.   The 1966 batch was then augmented with rums that are 40 to almost 50-years-old.   The Port Mourant Still comprises two large wooden vats constructed from Greenheart. It was first erected in 1732 at Port Mourant.

Posted by Bahama Bob's Rumstyles at 5:29 AM No comments: