The Source of the Rum: Sugar Cane

The history of rum ties itself to the history of sugar cane.   You go back to the 1600's and the early days of raising cane in the Caribbean and you will find the roots of rum.    The sugar cane, sugar production, and the slave trade have been at the center of the history of rum from the start.  Rum became a valuable commodity that was traded for slaves, sugar, and cash.

The by product of the sugar process is molasses, the primary ingredient in most rums.  The places you find sugar cane growing, you usually find a rum distillery.   In some of my recent trips around the Caribbean I have visited sugar cane fields and seen how it is processed for sugar and rum, but the sugar cane is the basis that is so important.   Many of the distilleries today depend on sugar cane being grown in the Dominican Republic and Brazil, but other s have their own cane fields on the grounds of the distillery.

The French make their rhums kniwn as agricoles, from a documented sugar cane that is crushed and fermented, rather than using the molasses.  In Barbados, the rum is made from molasses, which makes sense because of the enormous amount of sugar processing that took place there in the early days of the island.   This is an interesting part of the rum process, because of the history involved with the development of sugar throughout the Caribbean and the tropical climate areas. 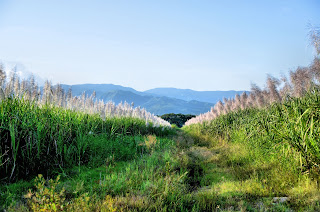 From the sugar triangle to the modern day rum producers, the basis is still the same today as it was in the 1600's.  Sugar cane is cut, some places manually, other places by machine, hauled to a crusher and sugar is extracted.  The residue molasses is then fermented and the rum process begins.   Much is talked about in the production of rum, but the sugar cane and the molasses that comes from the sugar processing are the real heritage of the rum.  ;o)
Posted by Bahama Bob's Rumstyles at 9:17 AM No comments: