Great News, The original Mr. Boston Official Bartender's Guide is back.  It is on line and it is very well done.   I have always thought that the Mr. Boston Guide was the best one around, and had the most accurate recipes, especially when it comes to the classics. 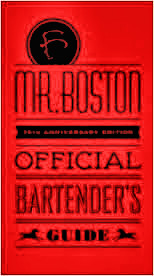 Mr. Boston used to be the barkeep's best friend. The unmistakable, narrow, cherry-red books were once found behind every bar. The first edition of "Mr. Boston Official Bartender's Guide" was published in 1935, just as America was again able to properly quench its thirst after Prohibition. More than 65 editions would be published.

Around the time that American bartenders became "mixologists" and cocktails got complicated, Mr. Boston fell from favor.  A few years back, the New Orleans-based Sazerac Co. bought Mr. Boston, which also sells a line of cordials and spirits.   Thursday July 21 Sazerac relaunched the Mr. Boston guide as a free, web-only tool.  Sazerac plans to make Mr. Boston bigger than ever.   The website:  www.mrbostondrinks.com offers more than 10,000 cocktail recipes from the post-Prohibition era.

It took the Sazerac Co. five years to get out of the Mr. Boston publishing contract.   While they waited, they found copies of all but 17 editions of the Mr. Boston guide and entered the 10,539 cocktail recipes into a database.   "We've been restoring it like you would a Van Gogh," said Mark Brown, president and CEO of Sazerac.   Now, you can search every one of those recipes at mrbostondrinks.com. When there is more than one recipe, the site lets you see each version to learn how the cocktail changed over time.

Recipes can be searched by name or main ingredient. A "discovery" page lets you browse by style, era, occasion, city of origin and even color. Create an account, and you can review the recipes and build a personal collection of your favorites.   The site also has a guide to techniques and glassware, a glossary of ingredients and historical information.

The Mr. Boston guide is a record of how America drank for 80 years. And the Sazerac company plans to keep the guide alive for at least another 80 years.   Although they likely won't print another guide, Sazerac has big plans for Mr. Boston. First, they want to find the remaining 17 editions and enter those recipes. They will create videos demonstrating cocktails and techniques. They plan to commission articles on cocktails. And users will be able to add new drinks, which will be considered for inclusion in the guide.

If you have a question, almost any question about mixology or bartending in general, this is the site you need to visit.
Posted by Bahama Bob's Rumstyles at 5:35 AM No comments: