"Social Host" Laws: You Could Be in Trouble 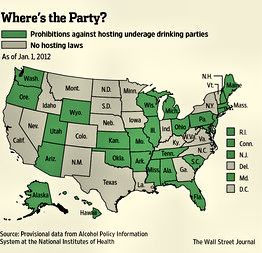 Backyard parties for the under 21 set can lead you to jail if you are not on top of what is going on.    28 of the 50 states have “social host” laws on the books and they are being enforced.   A few other states like California have related laws that are circumscribed laws that only impose penalties if someone is hurt.
In an article by Jennifer Levitz on September 11, 2012, in the Wall Street Journal she talks of several cases where these laws have gotten several people in serious trouble hosting parties for their under age children.
WARWICK, R.I.—Backyard bonfires and pool parties are popular pastimes for teenagers. But if alcohol enters the scene, the young revelers aren't the only ones who can land in trouble.
Public officials who have waged campaigns against underage drinkers are increasingly targeting the adults who host them. In May, a Massachusetts mother went to jail for permitting teenage drinking at home. The 18-year-old son of Rhode Island Gov. Lincoln Chafee was recently in hot water over a party he held in May.
Terri Serra listens during her trial for allegedly violating Rhode Island's 'social host' law.


And in Rhode Island, a former school-board member and cheerleading coach is currently on trial for allegedly allowing her daughter to host a post-homecoming gathering at which teens drank beer. She has pleaded not guilty.


All are in the spotlight under "social host" laws, which impose criminal or civil penalties on hosts who permit underage drinking on their property, regardless of who supplies the alcohol or whether anyone gets hurt. Some 28 states had adopted such laws as of January, up from 18 in 2005, according to the National Institutes of Health.


A handful of other states, including California, have passed more circumscribed laws imposing penalties on hosts if someone is harmed by underage drinking. And many cities and counties—from Cobb County, Ga., to El Paso, Texas—are passing or debating their own ordinances.


It is a reason for parents even here in Florida to take notice and be aware of what your children are doing even in your own backyard.     You could be spending several months in jail even if no one is hurt as a result of the party.    The article is a real “eye-opener” for those with kids that have pool parties that you are responsible for the supervision of.

Posted by Bahama Bob's Rumstyles at 9:02 AM No comments: