Yellow Crowned Night Heron that Dropped By for Karaoke 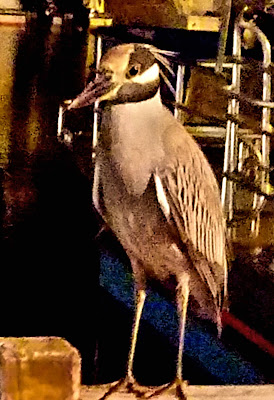 Wednesday evening we were graced by this Yellow Crowned Night Heron at the Hurricane Hole for Karaoke.  This is the first one that I have ever seen, even though they are a permanent resident of the Florida Keys.  They are a very unique looking bird, but I found it to be a very pretty as well.

The Yellow-crowned is quite common in parts of the southeast, specifically in coastal regions, often feeds by day as well as by night. Its stout bill seems to be an adaptation for feeding on hard-shelled crustaceans.  It is often called "crab-eater" in some locales.   It feeds at dusk or by night by walking slowly on land or in shallow water, or standing still waiting for prey to approach. Its feeding schedule near coast probably influenced by tides.

Breeding behavior not well known. Often nests in isolated pairs or in very small groups, especially in northern part of range. Mating displays include stretching the neck upward with bill pointing skyward, crouching with all plumes erected, and giving a loud call.   Pairs greet each other by raising crest, calling, touching bills, nibbling at each other's feathers. 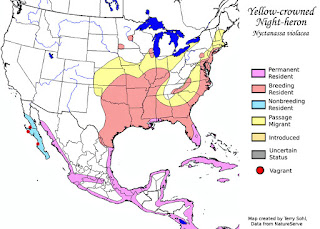 Nest: Site is usually in trees around 30-40' above ground, but sometimes very close to ground or water in thickets of mangroves. Nest is a platform of sticks, lined with finer twigs and sometimes leaves.