The Bacardi family lost one of its forward looking members last week, and I ran across a very enlightening obituary that not only shed a lot of light on Manuel Cutillas, but a n interesting information about the Bacardi  Company from the 30's Cuba to the nationalization of the Bacardi Company by Fidel Castro.  It also brings to light to changes the company has gone through from its exile until today.


Master of rum who shook Bacardi into a cocktail of brands 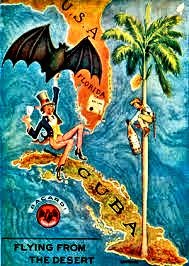 
With net sales last year of more than $4.5bn, it ranks as the world’s biggest privately owned spirits company and third overall behind Diageo and Pernod Ricard.

Yet Cutillas, great-great-grandson of the founder, was unable to fulfill his main dream – of returning to Cuba, where the family’s distilleries were confiscated by Fidel Castro after the 1959 revolution.


Cutillas had fled soon afterwards – initially to Miami, on a packed boat of illegal migrants – and the family dispersed. It was he who pulled them together in 1992 to consolidate five separate Bacardi companies they had variously spawned – in the US, Bermuda, the Bahamas (the branch he headed before then), Puerto Rico and Mexico – into a single entity now based in Hamilton, Bermuda. Cutillas became its first chairman.

He remained a passionate anti-Castro campaigner, belonging to several organizations that seek the regime’s downfall and a democratic Cuba. Although a cigar lover and able to get his hands on Havana’s he refused to smoke them, at least in public. On his retirement in 2000 he said of Cuba: “We would love one day to be back in there. You know, I believe that perhaps I will even see that.” His death this month at the age of 81 means he did not.


Cutillas had been with the family firm since 1955 when it was based in Santiago de Cuba, in the east of the island. It had been founded there four generations earlier in 1862 by Facundo Bacardi Massó, an immigrant from Sitges, Catalonia, who, in effect, created white rum as we know it today. But by the 1990s the cane-based spirit was being overtaken by vodka and tequila in world markets, while rival drinks multinationals were growing bigger.

“We saw consolidation happening and with a single brand it would have been very difficult for us to compete,” he said. “We had to grow. Had we not done that, we would have found ourselves having to sell or merge with a larger company.”
Read more at  http://www.ft.com/intl/cms/s/0/298ea00e-47d1-11e3-b1c4-00144feabdc0.html#axzz2kLAolA6G
Phil Davidson has written a well researched obituary that is well worth reading and very helpful in understanding the growth and progression of the largest family owned spirits company.   I'm very sure that Manuel Cutillas will be missed by the family and his friends, he surly was a very dynamic and industrious member of the operation.
Posted by Bahama Bob's Rumstyles at 8:23 AM No comments: