In Florida it is illegal to serve only two groups of people.  Under aged and "known alcoholics".  The first is easy to detect, just check the ID of the person wishing to buy spirits.   The second however, that is a different story.  The alcoholic most times appears sober and lucid.  If you don't know the person to be an alcoholic you can get yourself into trouble.

Now they have made it even harder.  This is an article that I read recently saying that heavy drinkers may not necessarily be alcoholics.  This article is a really good read.


The majority of adults who regularly drink an excessive amount of alcohol are not alcoholics or alcohol dependent, according to a new study. 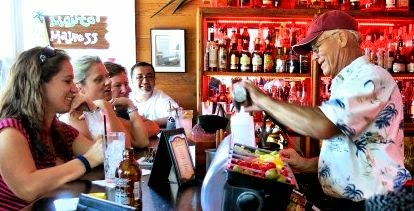 Nine out of 10 adults who regularly drink excessively are not alcoholics, new research shows.
Released by the Centers for Disease Control and Prevention in partnership with the Substance Abuse and Mental Health Services Administration (SAMHSA), the report revealed that nine in 10 adults who drink too much are actually not alcoholics.
Excessive or binge drinking is considered as four or more drinks in one sitting for women, or five or more drinks for men; drinking eight or more drinks a week for women or 15 for men; or any level of alcohol consumption by pregnant women.
Alcohol dependence is a chronic medical condition defined by an existing or previous history of excessive drinking, strong cravings for alcohol, on-going alcohol consumption in spite of drinking-related problems or a lack of control over how alcohol is consumed.
“This study shows that, contrary to popular opinion, most people who drink too much are not alcohol dependent or alcoholics,” said Robert Brewer, MD, MSPH, alcohol program lead at CDC and one of the report’s authors.
“It also emphasizes the importance of taking a comprehensive approach to reducing excessive drinking that includes evidence-based community strategies, screening and counselling in healthcare settings, and high-quality substance abuse treatment for those who need it.”
Furthermore, the study revealed nearly one in three adults is an excessive drinker, most of whom binge drink on more than on occasion.
You can read more at http://www.thespiritsbusiness.com/2014/11/most-excessive-drinkers-are-not-alcoholics/
Posted by Bahama Bob's Rumstyles at 7:00 AM No comments: