This is a revival of an old 1920's Prohibition cocktail called the Corps Reviver.    Of course being me, I never seem to be content with anything the way that it comes out of a book.  I'm not much of a gin or cognac person, so immediately I had to make the base of this cocktail rum.

There are a number of versions of this famous cocktail including a Kentucky Bourbon version, but this one will be called Bahama Bob's Caribbean Corpse Reviver, what else.  My idea takes an "ocean" aged rum Seven Fathoms Rum or another of your favorite aged rums and blend it into the flavors that yield a strong "hair of the dog" type of "Sunday Morning Coming Down" cocktail. 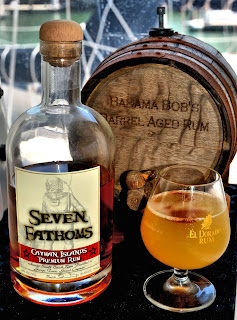 Place all ingredients except the bitters, in a shaker filled with ice and shake until chilled.  Strain into a coupe glass and drop in a dash of bitters.  Garnish to suit your likes and watch the previous night go away.