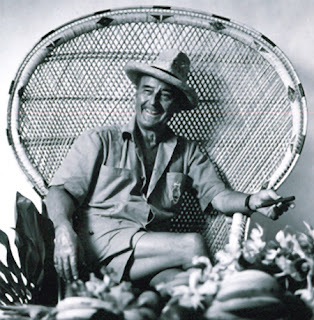 Today we celebrate the works of a man that was arguably the Father of the Tiki scene.   Born in New Orleans on February 22, 1097 and named Ernest Raymond Beaumont Gantt.    Gantt made do in the Depression economy through his wits and odd jobs.   he would work in restaurants in Chinatown, parking cars, and doing a bit of freelance bootlegging in the months prior to the end of Prohibition.  His sociable and charming personality allowed him to befriend such Hollywood personalities as David Niven and Marlene Dietrich.   Through them he was able  to find occasional work as a technical adviser on films set in the South Pacific. 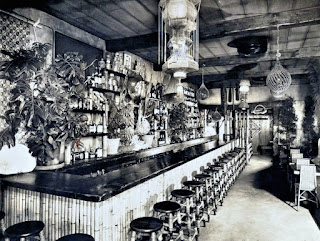 A couple of years after he arrived in Los Angeles, Gantt happened upon a newly vacated tailor shop at 1722 North McCadden Place,  just off Hollywood Boulevard.   Where he built a little bar that seated about two dozen customers and scattered a few tables around the rest of the area. The decorations for the place were his South Pacific mementos, along with some old nets and pieces of salvaged boats he scavenged from the coastline.    His watering hole became Don the Beachcomber. 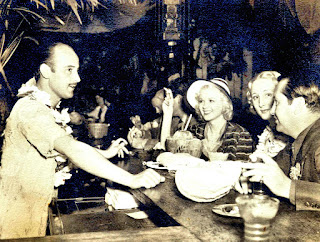 It was Gantt’s outgoing personality and the uniqueness of his cocktails that proved irresistible to the locals as well as the Hollywood celebs.    Among the first drinks was the Sumatra Kula, which cost a quarter. A well-dressed man named Neil Vanderbilt came in one day and ordered one, then another and another. He said it was the best drink he’d had in years. He was a writer for the New York Tribune, and he soon came back with friends, including Charlie Chaplin. Word of Don the Beachcomber began to spread through Hollywood and beyond. “If you can’t get to paradise, I’ll bring it to you,” is what Gantt would tell his customers.
Today he is best remembered for being the "father of the Tiki scene" and his famous Zombie cocktail.  This is a man from the past that is still having a huge influence on the cocktail world today.
Posted by Bahama Bob's Rumstyles at 5:14 AM 1 comment: