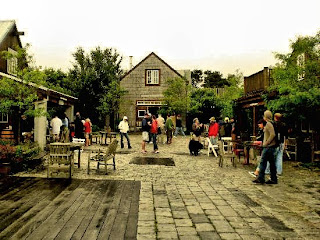 Triple Eight Distillery of Nantucket is producing an interesting rum called "Hurricane Rum", named for the storms that sometimes terrorize this little island off of Cape Cod.  Nantucket not really being thought of as a distillery location, but as part of a complex containing a winery, brewery and distillery it fits right in.  Triple Eight Distillery got its licence to produce high proof liquors in 2000.    Dean Long, the owner of the operation has turned the art of distilling into a destination, a place that makes wine, beer and liquor and a place for great food, for live music, great drinks, and a dog friendly environment for fun.   The complex fits in perfectly with the colonial port town appearance of Nantucket and is a place to really kick back and enjoy the fine liquors (Whiskey, Bourbon, Gin, Vodka and Rum) that this little artisan distillery produces.

Hurricane Rum was first released in the summer of 2003 at the height of hurricane season on the island.    Named for the storms that cause so much trouble for the people from Key West all the way along the Atlantic coast to Nantucket.   Hurricane Rum is an overproof rum (88.8 Proof) to match the strength of the storms that it was named for.   Aged in bourbon casks to impart the sweetness followed by notes of vanilla and other spices, this rum does however have a prickly tepid finish.  Quite mellow for an overproof, it is only marginally sipable, but it does have strong lingering flavor.

On the rocks it is better, but when mixed with Barritt's Ginger Beer, it makes a fine cocktail.  The Hurricane rum blends very well with the snap of the ginger to mask the roughness of it's finish for those sensitive to that.   I feel like this is going to be a fun addition to the Rum Lab for many of the stronger Tiki style cocktails calling for overproof rum.


Posted by Bahama Bob's Rumstyles at 8:34 AM No comments: