In a frozen corn field in Clearlake, Iowa 55 years ago today, a day that became known as "the day the music died".   Buddy Holly, Richie Valens and JP "The Big Bopper" Richardson were killed when their chartered plane went down in a snow storm. 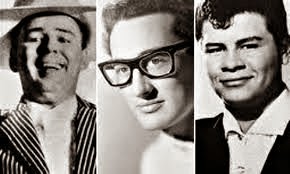 On this day in 1959, rising American rock stars Buddy Holly, Ritchie Valens and J.P. "The Big Bopper" Richardson are killed when their chartered Beechcraft Bonanza plane crashes in Iowa a few minutes after takeoff from Mason City on a flight headed for Moorehead, Minnesota. Investigators blamed the crash on bad weather and pilot error. Holly and his band, the Crickets, had just scored a No. 1 hit with "That'll Be the Day."
The distance between venues and the 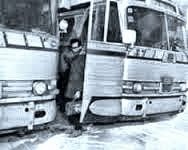 conditions prevalent aboard the poorly equipped tour buses adversely affected the performers. Cases of flu spread among the band members, and Carl Bunch was hospitalized due to frostbite. Frustrated by the conditions, Holly decided to charter a plane when they stopped for their performance in the Surf Ballroom in Clear Lake, Iowa, to reach their next venue in Moorhead, Minnesota. Carroll Anderson, owner of the Surf Ballroom, chartered the plane from the Dwyer Flying Service. Richardson, who was affected by the flu, swapped places with Waylon Jennings, taking the latter's place on the plane, while Tommy Allsup lost his place to Ritchie Valens on a coin toss. Dion DiMucci (of Dion and the Belmonts fame) decided not to board the plane for the $36 fee.

It never ceases to amaze me how a series of minor events can change the course of history like it did at the Surf Ballroom on the night of February 3. 1959.  I just know that rock and roll took a huge turn that day and things never were the same afterward.   Rock and Roll would see several other losses of very talented people through the years, but nothing will ever match  " The Day the Music Died".
Posted by Bahama Bob's Rumstyles at 8:50 AM No comments: