Honey Cinnamon Daiquiri: Sweet and Tart at the Same Time

Today I had an idea to create a Cinnamon Honey Syrup that wasn't too sweet.  The recipe worked out very well, because it doesn't have that super sickish sweetness that most syrups do. The combination of the sugars and the honey along with the lemon juice tame the sugary taste.

Next was what to do with it.  I was in the mood for a simple daiquiri, so with that in mind, I went to work on an idea.   The basis of a daiquiri is sugar, lime juice and rum, now where do we go from there.   The lemon notes in the syrup fell together with the regular daiquiri ingredients and the addition of the Dolins Vermouth was a nice plus.  I chose Panama Pacific for its dry and woody profile.  After putting this one together and straining it into a rocks glass filled with fresh ice the first taste was very rewarding, so much so that I went ahead and sat down of the aft deck to enjoy the blue skies and sunny afternoon while I finished the cocktail. 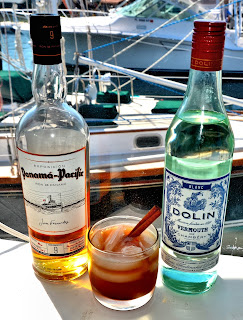 In a mixing glass with ice, add all ingredients and stir together until well-chilled, then strain into a rocks glass filled with fresh ice. Garnish with a cinnamon stick.


Place all ingredients except the water and cinnamon in a pan and heat at 375 degrees stirring until all melts into a liquid.  Slowly add the water and bring to a boil.  Add Cinnamon and reduce heat to 230 degrees and bring to a slow boil and continue stirring for 5 minutes.  Pour into a dish that will not melt or crack and place in refrigerator for about an hour.  Pour into a dispensing bottle and put into refrigerator until ready to use.
Posted by Bahama Bob's Rumstyles at 5:55 AM No comments: