Friday the Busiest and the Most FUN Day Yet! 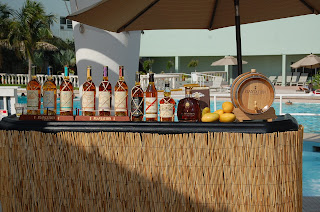 This was a day that took a real strong rumstyler to get through unscathed.      The day started out with 12 Plantation Rums for breakfast at 9:30 along with a very nice meal as well.     Guillaume Lamy of Plantation offered up a fine history and how each of the rums were selected and finished at Cognac Ferrand in France.     Not only did we get to taste all of these fine rums, we were afforded a chance to taste the 20th Anniversary Barbados before the final aging tin the Cognac casks as well as the finished product.

﻿
﻿      Next on the morning agenda was the forth round of the judging .   This is the real work of the day.     It takes time and focus to do a fair and unbias job of evaluating these fine rums.     It is also very interesting to see the "reveal" after each of the rum Judging sessions.

Cockspur Rum of Barbados is our host for lunch.      Dave Meyer and is team filled us in about the changes in the product and the new packaging.    The tasting of the Cockspur Fine and the Cockspur 12 Rums and the chance to carry on a conversation with the team members over lunch was very enlightening to the goals and directions that  Cockspur are aiming for.

After lunch it's back to the judging room for the final judging session.     This is the most rewarding of the sessions for it is the premium rums that we all enjoy the most.      The judging is followed by a press room interviews session and a break before the evenings VIP Party's begin.

The evening begins with the Mount Gay VIP Party at the SOHO Beach Resort.    The SOHO Beach Resort is one of those fabulous garden tiki bar venues to hold a VIP Party for a Bajan rum producer Mount Gay.     The steel drum band , island food, and of course the enjoyable Mount Gay Rum.     All made for an enjoyable couple of hours back down in the islands.     Thanks to the Mount Gay people for putting on a very nice evening of rum, conversation, and island inspired appetizers.

Back to the Deauville Beach Resort for the Abuelo Party in the Jazz Club.     This was a reunion for all of us that got the chance to spend some time together in Panama last February.     It was the first opportunity for America to taste the Abuelo Centuria, the rum made to celebrate 100 years of Varela Hermanos making rum.     I had a unique opportunity to be a  guest bartender for the party and spend some quality time with some very interesting people at the same time.     It was good to spend some time with Daniel Fabrega and Ricardo March, the gentlemen that were our gracious hosts in Panama.     This was a wonderful party full of surprise visits from several friends that hadn't made an appearance thus far at the Miami Rum Renaissance Festival.

An invitation from Richard Seale of Foursquare Distillery to taste a new rum was received as I left the Abuelo VIP Party, so it was off the the lobby bar and an opportunity to try the new Rum Sixty Six.    This is a new 12 year old rum that proved to be of excellent quality and flavor.    The group of us afforded the opportunity enjoyed the experience.
The day is finally at an end, a long and really fun day again.     The good news is the tough days are behind us.    Tomorrow is the start of the Grand Tasting at the Deauville Beach Resort from 2 til 8pm and then off to the Appleton VIP Party at the Delano Hotel's Florida Room.     ;o)
﻿﻿
﻿﻿
Posted by Bahama Bob's Rumstyles at 9:57 AM No comments: