I had an opportunity to visit "Plaza de la Revolucion"in Havana for the first time.  To that it is breath taking is an understatement.  I'll talk about the plaza and all of the things that surround the plaza in a later article.  In the Memorial Tower to Jose Marti, is the Museum Jose Marti.  Wandering through the different pictures and information I ran across several picture of Jose Marti's visits to Key West in 1891 through 1894.

In 1893 he was pictured at the house of Teodore Perez (Today La-Ti-Da) along with a group of Cuban patriots.   Jose Marti visited a gain in 1894 where he was pictured at the Martello along with Fermin Valdez Domnguez and Francisco (Paunchito) Gomez Toro.  There was also another  picture of Jose Marti with Fermin Valdez Dominguez. 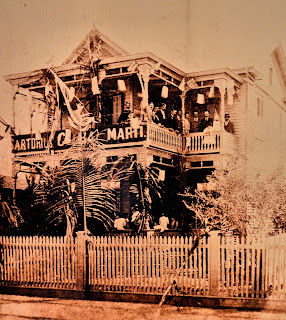 I didn't realize how important the support of the Cubans in Key West until my visit to the Memorial Jose Marti.

When the tobacco workers of Key West learned of Jose Martí's ideals and his thunderous visit to Tampa, they requested that the Cuban community leaders of Key West extend him an invitation to visit the city and present his views.   Martí received the news with much joy since he understood the timing could not be more propitious.   He had recently obtained the support of important segments of the Cuban communities in New York and Tampa for his plans to wage war against Spanish colonial rule in Cuba. However, he understood that the support of the Cuban community in Key West was critical to his efforts.

The Cuban exile community of Key West was the 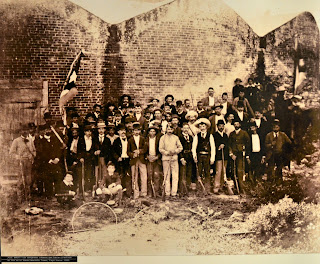 largest and wealthiest, but also the most politically divided.  To obtain their support would be essential, but it would not be an easy task. On Christmas day 1891 Martí departed from Tampa aboard the steamship Olivetti on his first visit to Key West.   He is accompanied by various leaders of the Tampa and New York Cuban communities.

I guess it was all summed up in the portion of the letter to Jose D. Poyo in December of 1893.  Jose Marti spent a lot of time at the San Carlos on Duval Street.  It houses a lot of information about Jose Marti's visits to Key West and the importance it played to his revolution.  Jose Marti was killed in action just over a year after the revolution began,  He never got to see the "Free Cuba" he dreamed of and worked so hard to make happen.

Jose Marti is the most revered and admired person in Cuban history and you can find monuments and tributes to him throughout the country of Cuba.